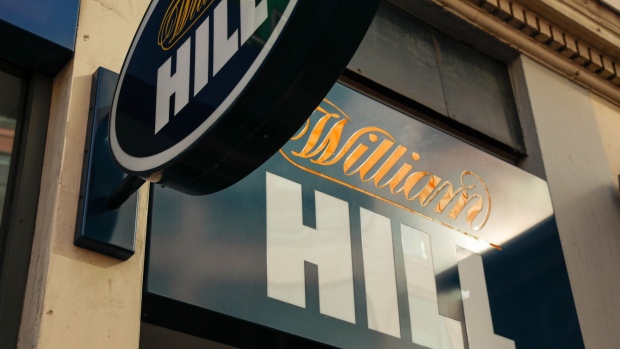 Chief Executive Officer Jette Nygaard-Andersen, who took over in January, plans to look at the non-U.S. assets of William Hill Plc that Caesars Entertainment Inc. is putting up for sale, including the well-known U.K. properties.

“We’re looking at everything, so we’re certainly also looking at whether this could be an interesting opportunity,” she said in a recent interview.

A deal would bring about tremendous consolidation in British betting shops, where Entain already has a 40% share. Bloomberg reported last year that the company, under a previous CEO, had also been interested in buying the non-U.S. assets of William Hill.

The global online gambling market is expected to grow by double digits annually to as much as $158 billion by 2028. That’s sparked a global race by casino operators, sports team owners, media companies and private equity firms looking to establish a strong position in the fast-growing business.

Entain itself almost became prey. In January, the parent of U.K. bookmakers Ladbrokes and Coral rejected MGM’s offer as too low and appointed Nygaard-Andersen, an existing board member, as its CEO.

“I don’t know if you should say exciting, but it was a busy Christmas and part of January,” said Nygaard-Andersen, 52.

In April, Entain took control of Enlabs AB, a Swedish online betting company with a big presence in the Baltics. It’s also making a run for some of the assets of Australia’s Tabcorp Holdings Ltd., a potential $2.7 billion deal.

The total volume of casino deals completed or pending has risen 33% to $22 billion so far this year, according to Bloomberg data. Notable transactions include the merger between Bally’s Corp. and Gamesys Group Plc, as well as Apollo Global Management Inc.’s purchase of the Venetian in Las Vegas.

Nygaard-Andersen, whose recent experience includes running esports teams and tournaments, sees a convergence between online betting and other forms of digital entertainment, such as video games. She talks about potentially adding a real casino to games like Take-Two Interactive Software Inc.’s Grand Theft Auto, or expanding chances to bet on Fortnite tournaments. But that’s still down the road. Right now, Nygaard-Andersen and her deputy CEO and chief financial officer, Rob Wood, are looking at deals across the globe.

William Hill agreed in April to be acquired for $4 billion by Las Vegas-based Caesars, its partner in sports betting in the U.S. Caesars has said it plans to sell the non-U.S. assets within 12 months to pay down $2 billion in debt.

Those businesses made up more than 80% of William Hill’s sales last year, according to a public filing. The auction is expected to start in about two weeks, and Caesars’ preferred approach is to sell all of the assets together, said a person familiar with the matter. Chad Beynon, an analyst with Macquarie Securities, estimates their value at about $2.5 billion.

One hurdle for Entain could be regulatory, Nygaard-Andersen said. A tie-up With William Hill would give the company a large market share in the U.K.

Apollo, which lost out to Caesars on the William Hill acquisition, is also interested in bidding for the non-U.S. assets, and may be the leading candidate, according to people familiar with the matter. Apollo is also bidding against Entain for the Tabcorp assets. Apollo declined to comment.

Other private equity firms may be interested, including CVC Capital Partners, which declined to comment. Blackstone Group Inc. considered it, but decided against pursuing the properties, according a person familiar with that company’s thinking.

Flutter Entertainment Plc, owner of the Paddy Power betting shops in Ireland and the FanDuel brand in the U.S., outlined a position somewhat similar to Entain’s on its most recent earnings call.

“I don’t think we’d be an acquirer of a very large number of shops, but we’re always interested in expanding our retail footprint,” Chief Executive Officer Peter Jackson said. “If there were customer databases or other things that we could acquire in European markets, we’d look at it.”

Another potential suitor for William Hill’s shops is Fred Done, the owner of Betfred, a rival bookmaker that owned about 6% of William Hill before the Caesars deal. A representative said he is still considering his position.

Nygaard-Andersen, the first woman to run a U.K.-listed betting company, was unperturbed by the competition or the challenges of a William Hill deal. And the company still has its online betting venture in the U.S. with MGM. The two companies have invested about $500 million in a business that may now be worth more than $10 billion.

“There is a vast amount of opportunities for us,” Nygaard-Andersen said. “So let’s see.”