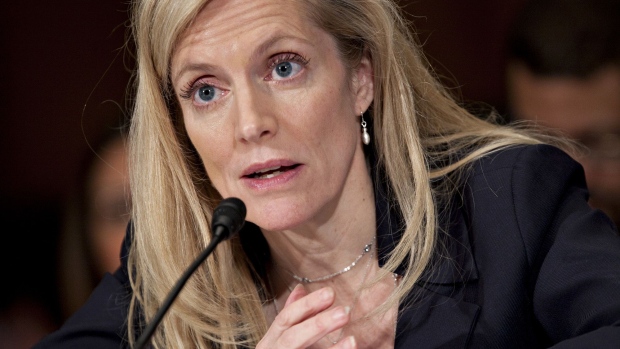 (Bloomberg) -- Lael Brainard’s record fighting back as the Trump administration loosened the leash on Wall Street has made her a leading candidate to be the Federal Reserve’s banking watchdog. And that’s not the only job she’s in line for.

The central bank’s lone Democratic governor, Brainard is also being discussed for more prominent Biden administration appointments, including to replace Fed chairman Jerome Powell and, potentially, for Treasury secretary if Janet Yellen leaves. That makes the role of bank supervision chief appear like a consolation prize, one that could block Brainard from securing the more prestigious posts, people familiar with the selection process said.

Also, she may not be a lock for the banking position -- known as the vice chair for supervision. One complication is a push to add minorities to the Fed’s all-White leadership as President Joe Biden considers nominees for at least three governor seats this fall, said other people, who asked not to be named in discussing internal deliberations.

Finance executives have reason to be laser-focused on Brainard. If Biden picks her to be Fed chair, she’ll become one of the world’s most powerful economic officials. But if she’s tapped to be the banking chief, she’ll have just as much sway over Goldman Sachs Group Inc., JPMorgan Chase & Co. and other firms because lenders’ profits will be greatly impacted by the wide-ranging policy changes that Democrats are looking to impose.

“Wall Street banks should brace for a more aggressive supervisory and enforcement environment,” said Jeremy Kress, a former Fed lawyer who teaches at the University of Michigan’s Ross School of Business. “Banks have gotten the benefit of the doubt for the last four years. That’s probably over.”

Much like its deliberations over whether to give Powell a second term, the Biden administration is charting a complicated path as it considers candidates for the supervision chief. Multiple constituencies on the left are weighing in, including progressives, minority groups and even environmentalists, who want the Fed to use bank policy to address climate change.

Brainard, 59, is the candidate most frequently mentioned for the supervisory position and has even been discussed among Biden’s advisers as being nominated with Powell to assuage Democrats who would be upset if Trump’s Fed chief gets another term, Bloomberg reported last month.

Still, several other people are under consideration for the vice chair job, said the people who include current and former Fed officials, Capitol Hill staff members and others privy to the discussions. The contenders include Atlanta Federal Reserve President Raphael Bostic and ex-Fed Governor Sarah Bloom Raskin, who has been a bank regulator in Maryland and a top Treasury official.

Adding some urgency is that the term of the current supervision head, Randal Quarles, expires Oct. 13. Democrats have made clear they want Quarles quickly sidelined since he presided over President Donald Trump’s push to ease post-crisis oversight. Quarles can keep his 14-year seat on the Fed board, however, into 2032. Until he’s replaced, Quarles is expected to continue as Wall Street’s watchdog.

Whoever follows Quarles should have a full slate. The vice chair is the point-person on stress tests, capital levels and leverage requirements -- regulations that influence how much banks can lend and how active their trading desks can be in making markets.

Other issues poised to come up could set the competitive landscape on Wall Street for years to come, including developing policies for cryptocurrencies and financial-technology firms. And the Fed is likely to face intense pressure from Senator Elizabeth Warren and other Democrats to revamp oversight after the collapse of family office Archegos Capital Management, a debacle that revealed banks were blind to the risk that one firm can pose to the financial system.

Such a weighty agenda shows why the vice chair post carries downsides. It’s a lightning rod on Capitol Hill -- taking incoming from Democrats who want tough action and Republicans who prefer a light touch. And the Wall Street lobby is an unyielding opponent, armed with massive resources and lawyers whose understanding of complex regulations often outmatches federal agencies.

Nor does the supervision chief have much automatic power. The post comes without unilateral authority to revise rules, meaning the Fed chair can influence and stymie priorities. Many progressives raise that point in arguing against giving Powell another term.

“You cannot have a chairman who has all the power reappointed and then put in a vice chair for supervision with an agenda 180 degrees different and expect anything other than civil war,” said Dennis Kelleher, the president of Better Markets, a Washington-based group advocating for aggressive oversight of banks.

There’s another calculation at play for Brainard, as well. Accepting the supervision post might hurt her chances of ascending to better jobs, especially Treasury secretary if it opens up. While some say the vice chair role would help Brainard showcase her tough-on-Wall-Street credentials, many argue that she’d be hard-pressed to move on quickly following what’s expected to be a contentious Senate confirmation fight.

One more complication: Quarles has publicly said he might remain on the Fed board even without the supervision portfolio. Though the remarks were vague, friends of Quarles claim he’s indicated he could stay through at least the end of the year, if not longer. If Quarles does, he’d have a platform for trying to protect his legacy of cutting rules.

Brainard knows all about the dynamics of internal opposition. She spent the Trump years attempting to foil Quarles’ agenda, casting almost two dozen opposition votes and issuing dissenting statements on many of his initiatives.

Even so, progressives have said they don’t necessarily support Brainard as vice chair. They’d prefer her to be chair over Powell, but many of them favor Bloom Raskin as the supervision chief.

The lack of minorities on the Fed board has also become an issue for the Biden administration, with some Democrats saying they won’t be happy unless the president nominates candidates who broaden the central bank’s perspective.

“We’re not sacrificing anything by getting diversity,” said Mehrsa Baradaran, an author and law professor who has advocated for a more inclusive banking system.