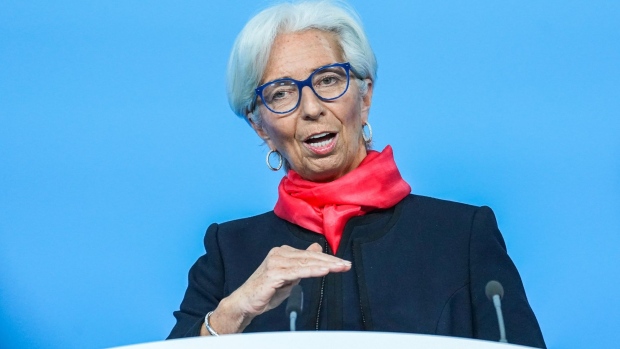 (Bloomberg) -- President Christine Lagarde reinforced her position that the European Central Bank can’t withdraw pandemic stimulus at the same pace as the Federal Reserve, which is gearing up to raise interest rates in March.

The economic recoveries in Europe and the U.S. are moving at different speeds, according to Lagarde, who’s said repeatedly that upward pressure on euro-area consumer prices from supply snarls and energy costs will gradually ease.

There’s “no question in my mind” that the ECB will act once its inflation criteria are satisfied, Lagarde told a virtual panel of the World Economic Forum on Friday. “But at the moment, they are not satisfied.”

The ECB currently sees price growth coming in below its 2% target in 2023 and 2024. But it’s faced pressure to take action after inflation hit a record 5% last month. While officials have agreed to wind down emergency bond-buying, they say an interest-rate increase is highly unlikely this year.

Financial markets aren’t so sure, betting that the surge in prices will prove to be more enduring. They’re currently pricing in a rate hike as soon as September.

“We have to be open to any change to this inflation outlook,” Lagarde said. “We will be having projections in a couple of months that might look different, and at that point I might have to look at my roadmap.”