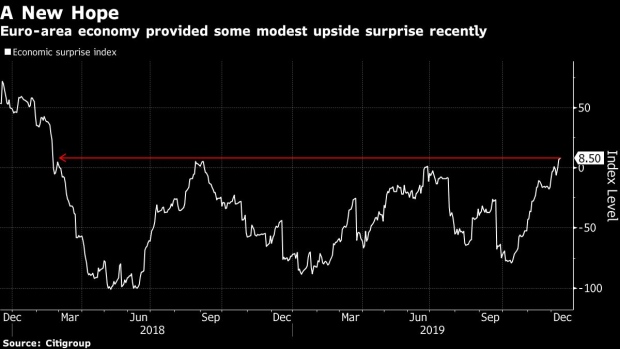 (Bloomberg) -- If Christine Lagarde carries on as she started, she may turn out a lot less trigger-happy than her predecessor as European Central Bank president.

Six weeks after taking office, the Frenchwoman gave an assured performance at her debut press conference that focused on the need for reflection rather than action. She showcased her initiative for a yearlong review of the ECB’s monetary policy, expressed hope for the economy to stabilize, and didn’t say much on what she would do if it didn’t.

That thoughtful stance on Thursday contrasts starkly with Mario Draghi, who delivered a surprise interest rate cut at his first meeting in 2011, then reduced borrowing costs again multiple times along with successive rounds of quantitative easing. When he concluded in October, having just masterminded a final and controversial dose of stimulus, investors were left anticipating more by the end of the year.

“It’s understandable that she might not be banging the drum for one particular policy or another,” said George Buckley, an economist at Nomura International. “At this stage of her presidency the most important thing is to craft consensus. She’s new, that’s her style.”

Lagarde, the first woman to lead the ECB in its two decades of existence as the guardian of the euro, went out of her way to stress that her presidency won’t be the same. “I’m going to be myself, and therefore probably different.”

That statement of intent came in an unusual set of remarks delivered after she had read out the statement of the Governing Council. She set out her plan for a review of the way the ECB conducts monetary policy, a major item anticipated for Thursday that wasn’t referred to in the text agreed by the council.

Some policy makers wanted a reference to the damaging side effects of negative interest rates included in the opening statement, according to officials familiar with the matter. The debate was relatively brief before the council decided that taking such action could be over-interpreted by investors, the officials said.

While her more optimistic tone on the economy could reflect the absence of her dovish predecessor, it also follows a recent shift in prospects. At Draghi’s final meeting on Oct. 24, the Governing Council was lamenting “protracted weakness” of the euro-zone economy. Lagarde on Thursday noted “somewhat less pronounced” risks to growth.

Economic indicators have mildly improved, and some measures of activity and sentiment appear to have stabilized. The Citi surprise index for the region, showing how data exceeds or undershoots economist forecasts, is at the highest in more than 1 1/2 years.

The economic backdrop described by Lagarde, along with qualms expressed by her colleagues at the harmful impact of negative interest rates, have left economists wondering if the cut they once predicted for December will ever come.

“The probability is rising that it won’t be necessary,” said Ricardo Garcia, euro-zone chief economist at UBS Group AG in Zurich. He says it’s now likely that ECB policy won’t change throughout 2020.

One reason for that inertia relative to her predecessor is the lack of ammunition after successive stimulus under Draghi used up most of the toolkit.

“The ECB will and should act if things worsen, but it probably won’t come as easily as we’ve seen in the past,” said Anatoli Annenkov, an economist at Societe Generale.

Whatever happens, it’s clear Lagarde’s style will be different, as she showed in her press conference on Thursday.

“She did it really well,” said Garcia of UBS. “One didn’t have to decipher her phrases. I think she wants it that way. That’s welcome.”

To contact the reporters on this story: Craig Stirling in Frankfurt at cstirling1@bloomberg.net;Catherine Bosley in Zurich at cbosley1@bloomberg.net

To contact the editors responsible for this story: Simon Kennedy at skennedy4@bloomberg.net, Fergal O'Brien, Brian Swint