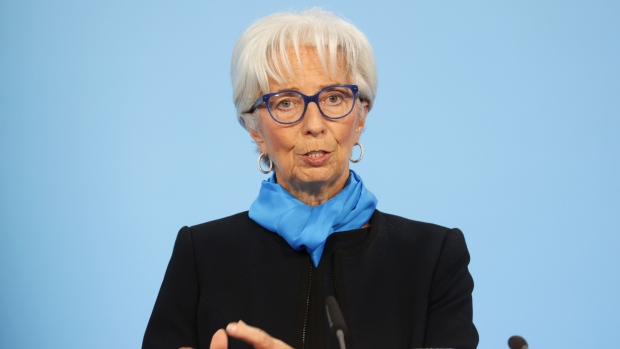 The European Central Bank’s Governing Council advised President Christine Lagarde to emphasize their forward guidance but to stop short of saying that financial market interest-rate expectations are wrong, according to officials familiar with the matter.

Policy makers argued that investors might have different views on inflation than the central bank, and given high uncertainty around the outlook, outright pushback could backfire, the people said, speaking on condition of anonymity because the deliberations are private. All policy makers agreed that current market pricing showing interest-rate increases next year is unfounded.

That background provides context to Lagarde’s insistence that she didn’t want to judge investor bets, comments that some analysts suggested showed a lack of conviction.

“Are markets ahead of themselves? Not for me to say. What I have to do and what I have to assess is the validity of our analysis, and then testing our analysis once we have determined that it was correct against the conditions for our forward guidance.”

Officials also agreed that Lagarde should send a message that current conditions would allow pandemic bond purchases to end next March as planned, which she then did so explicitly.

Investors had doubled down on bets of the ECB hiking in 2022 prior to the policy update, and barely pared them back after Lagarde’s press conference on Thursday.

An ECB spokesman declined to comment on Thursday’s deliberations.