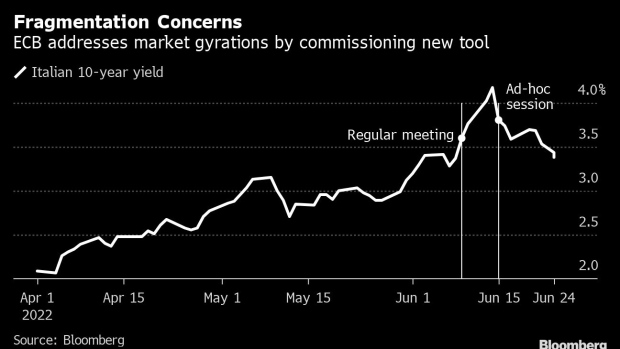 It was while sitting apparently alone in a London hotel basement that Christine Lagarde engineered a fix to the euro zone’s most alarming debt turmoil since the pandemic struck.

With a mini heatwave mounting outside, and seemingly armed only with a coffee pot and her customary iPads, the European Central Bank president took 2 1/2 hours to galvanize Governing Council colleagues into action during an emergency June 15 video call.

Their response -- a two-pronged pledge to counter market speculation -- was enough to quell a nascent Italian bond crisis without a single extra euro having yet needed to be spent.

A decade after her predecessor Mario Draghi, also in London, stemmed far worse debt turmoil, Lagarde’s actions leading to the decision underscore the shift in ECB philosophy on markets -- one that is likely to be touted at its annual retreat this week in the Portuguese resort of Sintra.

In particular, as officials who spoke for this story claim, it shows a bias toward confronting turmoil early, enabling calm decision making -- in contrast to the panic that gripped the ECB in March 2020 after a misstep by Lagarde preceded the creation of an emergency bond-buying measure.

This is an account of the events that brought her to that crunch moment, in a random room in a foreign capital, informed by multiple people familiar with the matter who spoke on condition of anonymity because their discussions are confidential.

It begins in Amsterdam on Wednesday, June 8, at the first Governing Council decision meeting outside of Frankfurt since 2019.

Lagarde was at ease. She shared jokes with the king and queen of the Netherlands, took time to admire Jan Vermeer’s masterpiece “the Milkmaid” at the city’s Rijksmuseum, and dined convivially with policy makers.

Despite months of contemplating dangers, and a warning nine days earlier by Bank of Italy Governor Ignazio Visco, officials were sanguine about the prospect of stress in weaker euro members’ debt markets as they formalized a plan to raise interest rates.

Their two-day meeting focused most on the speed of tightening. Speculation of a tool to address debt tensions had built beforehand, resulting in disappointment when Lagarde didn’t reveal one, but even so, the adverse market reaction didn’t yet give cause for alarm.

Within 24 hours, officials watched the picture change markedly as a 40-year high in US inflation sparked speculation of an out-sized rate hike by the Federal Reserve. Amid a storm gripping global markets, Italian yields extended their surge. After the breathing space of a weekend, Monday came and turmoil only intensified.

Italian 10-year yields climbed above 4% for the first time since 2014, and as Lagarde discussed the gyrations of Italian bonds with Executive Board colleagues said to include Chief Economist Philip Lane and Isabel Schnabel, and senior staff, she began to wonder if doing nothing was still an option.

The next day was Tuesday, when the six-member Board gathers for a weekly meeting in the morning. The president, aware that a conference in Milan featuring seven ECB officials was scheduled for later in the week, realized that news headlines on Italy just weren’t going to stop.

Arguing that market tensions could worsen, Lagarde convinced her board that it was time to revisit the ECB’s crisis playbook and convene an ad-hoc meeting, even if that meant pre-empting the Fed’s scheduled decision. Invitations for a video call the next day were promptly issued.

The president headed to London next. Meanwhile in Paris, Schnabel delivered a speech to a hall of bored and bewildered Sorbonne students, appearing to suggest no response was imminent.

When the video call kicked off at 10 a.m. London time, Lagarde seemed to be conducting the discussion from a rather blank nondescript room. Officials later learned that she had opted to direct the crucial crisis meeting from a corner of the basement of her hotel, rather than from the rather poky room she had booked upstairs.

Neither panic nor alarm colored the discussion she chaired. While Bundesbank chief Joachim Nagel was among those with reservations, officials opted to act on the basis that past lessons showed lingering problems can become overwhelming all too quickly.

They agreed as a first defense to tilt reinvestments of maturing bonds bought under their pandemic program toward struggling countries, and also to accelerate work on a new crisis tool.

Neither decision actually involved any immediate debt buying, and it is yet to be seen if such purchases will be needed. Indeed, officials still hold out the hope that the ECB can devise a measure that investors will perceive as potent enough to deter speculation -- reminiscent of Draghi’s as yet-unused OMT tool created in 2012.

The ECB is now awaiting advice from staff including defining when action would be warranted, which conditions governments must fulfill, and ways to neutralize the impact of renewed bond purchases on the balance sheet -- ideally for their July 21 decision.

With the ECB’s decision published in a statement, Dutch Governor Klaas Knot told the conference back in Milan to “rest easy, we are ready.” Meanwhile Italian 10-year bond yields have stayed noticeably below 4% ever since.

Back in London, Lagarde slipped out of crisis mode and resumed her scheduled engagements. She inaugurated a new ECB office near Westminster -- it’s not clear why she didn’t use those premises -- and received an honorary university degree.

Turbulence could still flare up again, but for now the action on June 15 amounts to one of the ECB’s most effective use of words under Lagarde’s leadership. And instead of the circumstances of Draghi’s more dazzling declaration to do “whatever it takes” to protect the euro, it stemmed a crisis early.

That’s not to say the ECB has escaped criticism. Last Monday, Lagarde was accused of prevarication as she found herself in yet another capital, Brussels.

“Do you think your Governing Council is taking decisions or simply announcing them behind the markets?” Jonas Fernandez, a European Parliament lawmaker from Spain asked her, observing: “I think the ECB is acting behind the markets.”

As Lagarde disagreed, she insisted officials are being nimble about tensions.

“You have to kill it in the bud, you don’t want to let the fragmentation risk happening,” responded Lagarde. “You want to pre-empt that, and you want to prevent it.”

(Adds Sintra conference details in fourth paragraph. An earlier version corrected the month of the meeting.)