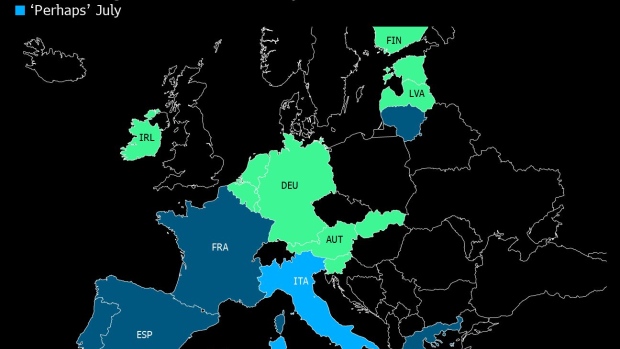 The plan to exit subzero monetary policy by the end of the third quarter that was revealed in a blog post on Monday would effectively exclude a half-point move, a position that leaves some more hawkish officials uncomfortable, said the people, who declined to be identified because discussions are confidential.

Lagarde’s intention to conclude more than a decade of subzero interest rates was spelled out in a blog post on the ECB’s website. Her comments imply a 25 basis-point hike at both the July and September meetings. An ECB spokesperson declined to comment.

German bonds extended losses after the report. The euro traded at around $1.0668, holding onto earlier gains.

While ECB policy makers have increasingly coalesced around the prospect of a first hike at their July 21 meeting in recent weeks, they have barely mentioned the possibility of a more aggressive half-point move such as the US Federal Reserve delivered this month.

The only official to publicly allude to that option until now has been Dutch central bank Governor Klaas Knot, who said on May 17 that his preference would be for a quarter-point increase, “unless new incoming data in the next few months suggests that inflation is broadening further or accumulating.”

Officials have also displayed unity about waiting until July, rather than acting faster with a move in June that would jar with their guidance saying that bond purchases should end before a rate hike.

Possible tensions behind the scenes on the path of monetary policy would be taking place against a backdrop of a rapidly shifting global economic environment. Inflation now reached 7.4% in the euro zone and most of the ECB’s peers are already now in a tightening mode.

Any discord would evoke memories of the tenure of Lagarde’s predecessor, Mario Draghi, whose leadership style riled some colleagues who made their views increasingly known toward the end of his tenure.

In contrast with many outspoken colleagues in recent weeks, the president has been relatively reticent in specifying her view on rate hikes, making her Monday remarks all the more significant.

The view she shared is still more aggressive than some dovish members of the Governing Council, for example Bank of Italy Governor Ignazio Visco.

“We can move gradually, raising interest rates in the coming months,” Visco said in an interview with Bloomberg Television on Friday. While June is too early as that is when the ECB will end net bond purchases, “we will move after that -- after that, means perhaps July.”

(Updates with markets in fourth paragraph)