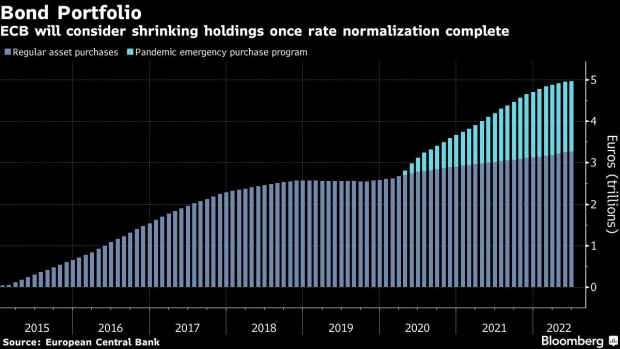 Christine Lagarde, president of the European Central Bank (ECB), during a news conference in Frankfurt, Germany, on Thursday, July 21, 2022. The ECB raised its key interest rate by 50 basis points, the first increase in 11 years and the biggest since 2000 as it confronts surging inflation even as recession risks mount. , Bloomberg

(Bloomberg) -- Christine Lagarde said the European Central Bank will consider shrinking its balance sheet only once it has completed the “normalization” of interest rates.

Raising borrowing costs is the most appropriate and effective tool for now to combat record-high euro-area inflation, the ECB President told lawmakers in Brussels Monday.

That suggests that only once rates have reached the so-called neutral level -- where they are neither stimulative nor restrictive -- will the Governing Council address what to do with the trillions of euros of debt the Eurosystem holds.

“When we have completed our monetary policy normalization, using the most appropriate, efficient and effective tool, that are the interest rates, then we will ask ourselves: how, when, at which rhythm, at which pace, we use the other monetary tools that we have available, including quantitative tightening,” Lagarde said. “But that will take place in due course, in due time, once we are completing the normalization process, and exhausting the benefit of what we regard as the most appropriate tool at the moment.”

The comments seem to jar with remarks by Bundesbank President Joachim Nagel last week that the ECB needs to start shrinking its stash of bonds bought during recent crises.

“Our special measures need to be quickly resolved once they’ve fulfilled their purpose -- that means I’m clearly for a reduction of our balance sheet,” he said Friday in Lucerne, Switzerland. “A phase of such high inflation that we’re forced to hike rates just doesn’t mesh with a huge portfolio from asset-purchase programs.”

Reducing the almost 5 trillion euros ($4.8 trillion) of bonds bought by the ECB during recent crises is expected to be discussed at officials’ non-policy meeting in Cyprus on Oct. 5 and will likely also be debated at subsequent gatherings, people familiar with the matter have told Bloomberg.

The ECB raised its deposit rate to 0.75% earlier this month and traders expect another such step in October. That puts borrowing into the range of what some economists are considering neutral territory. Governing Council member Francois Villeroy de Galhau sees it at below or close to 2%.

The ECB chief didn’t want to say where that level may be.

“What we want to do is to arrive at the point where monetary policy is neither stimulating, not tightening that economists call the neutral rate -- we are not there,” she said. “When we get there we have to determine whether we reach our target of 2% in the medium term. And if we don’t, then we might have to take further measures.”