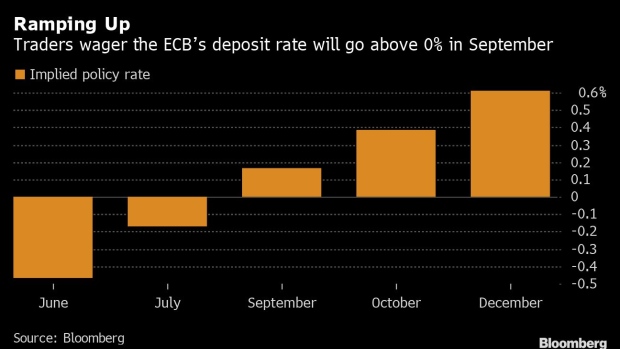 Christine Lagarde, president of the European Central Bank (ECB), during a Bloomberg Television interview on day two of the World Economic Forum (WEF) in Davos, Switzerland, on Tuesday, May 24, 2022. The annual Davos gathering of political leaders, top executives and celebrities runs from May 22 to 26. , Bloomberg

“I don’t think that we’re in a situation of surging demand at the moment,” Lagarde said in an interview on Tuesday at the World Economic Forum in Davos, Switzerland. “It’s definitely an inflation that is fueled by the supply side of the economy. In that situation, we have to move in the right direction, obviously, but we don’t have to rush and we don’t have to panic.”

Lagarde spoke out after publishing a blog post effectively laying out a path for the ECB’s next three scheduled decisions that will put the institution on track to finally exit subzero monetary policy and align more with global peers already acting against the threat of inflation. Villeroy’s remarks signaled that he and other officials currently assent to her timetable.

“A 50 basis-point hike is not part of the consensus at this point, I am clear,” the governor said. “It will be a normalization of our monetary policy, it’s not a tightening” and “interest rate hikes will be gradual,” he said.

Under Lagarde’s calendar, the ECB will end bond purchases in June, and hike once in July and once in September, bringing its deposit rate from -0.5% up to zero. That timetable riled colleagues who want to keep open the option of acting faster, according to people familiar with the matter.

The euro pared gains following Villeroy’s comments, retreating to around $1.0714 after earlier remarks by Lagarde drove it to a one-month high of $1.0736.

Both Lagarde and Villeroy see rates proceeding higher to reach a level deemed to be neutral, which could be between 1% and 2%.

The French governor outlined a vision to reach that band “some time next year,” implying a whole series of rate hikes within the next 18 months. Traders are wagering on four 25-basis-point hikes by the ECB by end-2022.

The ECB president downplayed the risk of a slump taking hold in the region, saying that “for the moment, we are not seeing a recession in the euro area.”

She cited unemployment “at rock bottom rates,” large household savings and the prospect for a strong summer for the tourism industry as forces that will offset negative shocks from the war and record inflation. Villeroy concurred.

“When we look at activity it is still resilient in Europe,” he said. “We will still have significant growth this year.”

Supporting their view, surveys of purchasing managers released on Tuesday pointed to continuing growth. Services recorded the second-strongest expansion in the last 8 months in May with consumers driving growth in tourism and recreation, according to S&P Global.

As the ECB begins to raise rates, it will be careful to avoid an “unwarranted” widening of spreads in the euro area, Villeroy said, noting the central bank’s intervention with the PEPP asset purchase program in 2020.

“We have the will to act and the capacity to act if necessary,” Villeroy said. “Nobody should expect the ECB to be absent in the case of fragmentation.”