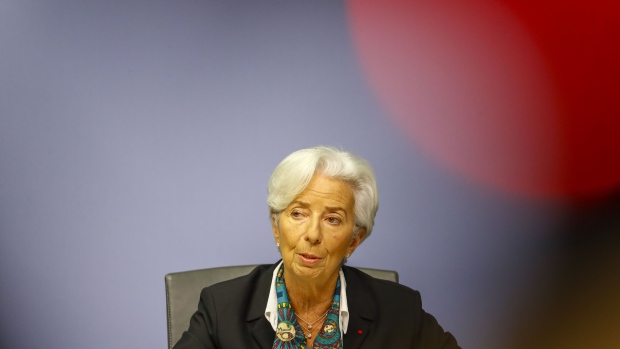 European Central Bank President Christine Lagarde has written to policy makers asking them to refrain from publicly discussing the institution’s impending strategy review and its parameters before she formally announces it on Jan. 23.

Lagarde made the request in a letter to Governing Council members, in which she also said they’ll start their two-day meeting early to give them time to consider all the issues, the people said, asking not to be named because the letter was confidential. They didn’t say whether it was sent this year or in December. An ECB spokeswoman declined to comment.

The missive probably reflects the president’s desire to prevent the debate over the strategy review, the first since 2003, from spiraling out of control. It’s an indication of her likely approach to maintaining discipline in communications by Governing Council members -- echoing her previous role at the International Monetary Fund where she developed a reputation for running a tight ship.

Read more: Christine Lagarde Faces Peril on All Sides at the ECB

Opinions have proliferated in recent weeks over what the ECB assessment should study. Topics include the enigma of why inflation remains low, possible changes to the price-stability goal, and issues that some see as a potential distraction such as climate change and digital currencies.

Only last week, Bank of France Governor Francois Villeroy de Galhau said the central bank should adopt a symmetrical inflation target. Dutch governor Klaas Knot has repeatedly called for a target range that would give policy makers some flexibility in reaching the goal.

Speaking shortly before his term on the Executive Board ended in December, Benoit Coeure said the ECB should clarify that it aims to achieve 2% inflation and argued in favor of a tolerance band. New board member Isabel Schnabel has signaled that she wants the inflation goal to be clarified, and that it didn’t seem like it “wasn’t originally understood as symmetrical.”

On the other hand, Bundesbank President Jens Weidmann has signaled he sees no need to tinker with the current goal of “below, but close to, 2%.”

Lagarde told the press conference last month that she plans to start the review in the course of January, and that it should “turn each and every stone.” She has been the highest-profile advocate of the view that the ECB should do what it can to help the fight against climate change. That has provoked murmuring among some policy makers that the central bank must take care not to lose its focus on their primary mandate of price stability.

Governing Council members will enter a weeklong quiet period on Thursday, before gathering on Jan. 22-23 to set interest rates, evaluate monetary stimulus and debate the strategy review. If Lagarde gets her way, she’ll then be able to use her press conference to announce the start of a process that could overhaul the way the euro zone’s monetary guardian operates.

--With assistance from Piotr Skolimowski and Carolynn Look.

To contact the reporter on this story: Paul Gordon in Frankfurt at pgordon6@bloomberg.net

To contact the editors responsible for this story: Alaa Shahine at asalha@bloomberg.net, Paul Gordon, Craig Stirling