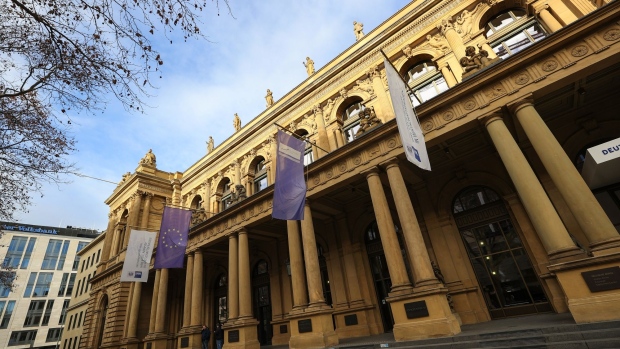 The Frankfurt Stock Exchange, operated by Deutsche Boerse AG, in Frankfurt, Germany, on Monday, Dec. 14, 2020. The topsy turvy trade talks between the U.K. and the European Union took another somersault on Sunday when Boris Johnson and Ursula von der Leyen gave negotiators another shot at closing a deal. Photographer: Alex Kraus/Bloomberg , Bloomberg

(Bloomberg) -- Lakestar SPAC I SE, which is backed by an early investor in Spotify Technology SA, rose as it started trading in Frankfurt after raising 275 million euros ($333 million) in Europe’s largest-ever listing of a blank-check company focused on technology acquisitions.

The shares traded at 11.34 euros at 09:41 a.m. on the Frankfurt Stock Exchange, compared with the issue price of 10 euros per unit. It sold 27.5 million units, each consisting of one share and one third of a warrant, according to a statement Friday. The warrants trade separately.

The special-purpose acquisition company will look for targets with an equity value of between 750 million euros and 4 billion euros in the technology sector. It is sponsored by Klaus Hommels, founder and chairman of Lakestar Advisors GmbH, which has also invested in Facebook Inc., Skype Inc. and, more recently, digital bank Revolut Ltd., according to its website.

“What we are really excited about is to find an outstanding European tech company, and to enable it to continue its success story as a public company,” the SPAC’s Chief Executive Officer Stefan Winners said in the statement. “Our search starts now.”

Lakestar is only the fourth blank-check listing in Europe over the past 12 months and follows ESG Core Investments BV’s debut in Amsterdam this month. More are lining up to tap the region’s markets, with French asset manager Tikehau Capital saying it plans to raise funds for a SPAC along with senior business executives and billionaire Bernard Arnault.

Still, many European issuers prefer to take their deals to the U.S. Former MegaFon PJSC head Ivan Tavrin raised $450 million for two new blank-check companies targeting acquisitions in the European technology industry, both of which listed on Nasdaq last week.

And the management of German startup incubator Rocket Internet SE is drawing up a SPAC that will look for a technology deal outside of the U.S. but will be listed on the New York Stock Exchange, according to a filing this month.

Lakestar is the third blank-check firm ever to list in Germany and the first since 2010, data compiled by Bloomberg show.