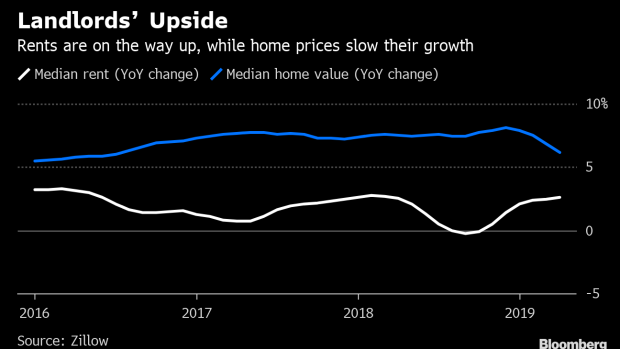 (Bloomberg) -- The U.S. housing slowdown is turning out to be a gift to apartment landlords. After all, those people who aren’t buying still need somewhere to live.

Data from Zillow released Thursday shows that home-price appreciation continued to slow in April from a year earlier, driven in part by softening West Coast metros like San Jose and Seattle. The company also reported the first nationwide monthly price dip in more than seven years -- albeit just 0.1%. At the same time, rent growth accelerated, climbing by 2.6% on an annual basis, after a lull in 2018.

Americans pulled back from home purchases last year after mortgage rates spiked, exposing the underlying affordability problem in the property market. Many people piled into rentals, where landlords were offering concessions after a period of overbuilding higher-end units. That increased demand helped drive up what people were willing to pay for an apartment.

Rents and home values tend to move together over the long-term, said Skylar Olsen, Zillow’s director of economic research. “But, in this case, what we’re seeing is a little different.”

More broadly, the challenge for the U.S. housing market is scarcity. As millennials -- one of the largest U.S. generations -- reach prime homebuying age, they’re finding that the supply of entry-level houses hasn’t nearly kept pace with their numbers. That could force them to rent for longer as they save up to buy the homes that are available, Olsen said.

To contact the reporters on this story: Noah Buhayar in Seattle at nbuhayar@bloomberg.net;Prashant Gopal in Boston at pgopal2@bloomberg.net

To contact the editors responsible for this story: Debarati Roy at droy5@bloomberg.net, Christine Maurus, Rob Urban