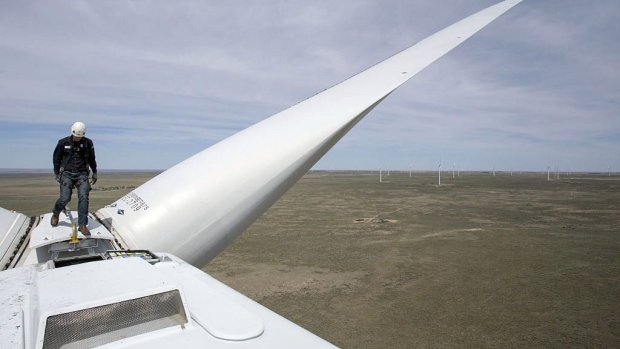 A General Electric Co. renewable energy technician walks on a turbine at the Colorado Highlands Wind Farm in Fleming, Colorado, U.S., on Thursday, May 5, 2016. Wind technicians are forecast to be the country's fastest-growing occupation through 2024, outpacing health care and technology fields, according to the U.S. Bureau of Labor Statistics. Bloomberg Bloomberg Bloomberg , Stephen Cunningham and Christopher Martin

(Bloomberg) -- A 40-year-old law that’s been key to the growth of renewable energy in the U.S. is effectively being overhauled, changing the way small solar and wind projects are developed.

U.S. regulators voted to set new limits on which energy projects fall under the Public Utility Regulatory Policies Act, known as Purpa, which helped spur an entire generation of solar and wind farms across the U.S. Critics say the changes will undermine clean-energy expansion, while proponents argue they could result in lower power bills for consumers.

Utilities have long sought changes to the law, which they say saddles consumers with expensive contracts and power they don’t need. Solar and wind developers, meanwhile, say Purpa is critical to giving renewables a leg up in states that aren’t green-leaning. Under Purpa, a developer that could build a project for less than a utility could request a contract to sell power to that utility.

The Federal Energy Regulatory Commission on Thursday reduced the mandatory purchase obligation for utilities to 5 megawatts from 20 megawatts in some markets, and gave states more authority to set the price at which small generators sell their power. The “one-mile rule,” which determines whether generation facilities should be considered to be part of a single facility, was also changed. The agency will now require that qualifying facilities demonstrate commercial viability.

“While Purpa laid the foundation for the competitive wholesale power markets that we have today, the energy landscape in this country has changed drastically,” said commission Chairman Neil Chatterjee.

Renewables advocates criticized the rule change, saying it would hurt the expansion of solar and wind energy.

The new rules will “stifle competition, allowing utilities to strengthen their monopolies and raise costs for customers,” Washington-based Solar Energy Industries Association said in a statement. “We will continue advocating for reforms that strengthen Purpa and allow solar to compete nationwide.”

Commissioner Richard Glick, the lone Democrat on the panel, dissented in part but said that the changes would benefit consumers. “Under the old regime, customers were overpaying for power they were receiving” to the tune of $2.2 billion to $3.9 billion, he said.

States had already made efforts to curtail development of some projects. North Carolina, which became the second-largest market for solar power because of these requirements, passed a law in 2017 that cut avoided costs and shortened contracts to 10 years from 15 years.