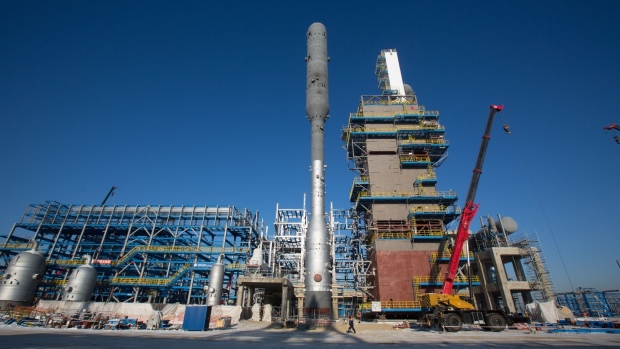 A methane extraction column towers above the site of the Gazprom PJSC Amur gas processing plant, under-construction by China Gezhouba Group Corporation (CGGC), as part of the Power Of Siberia gas pipeline project, near Svobodny, in the Amur region, Russia, on Thursday, Dec. 12, 2019. The pipeline, which runs from Russia's enormous reserves in eastern Siberia and will eventually be 3,000 kilometers (1,900 miles) long, will help satisfy China's vast and expanding energy needs. , Bloomberg

(Bloomberg) -- Scientists have used satellite data to identify more than 1,800 major releases of the potent greenhouse gas methane, according to a landmark study published in Science. The research validates a methodology developed in recent years to spot super-emissions from fossil fuel operations.

Large plume events account for between 8% and 12% of all releases from the oil and gas sector and many of them can be mitigated at low cost, according to the report published Friday. The methane detected by French and American researchers from 2019 and 2020 was concentrated mostly in Russia, Turkmenistan, parts of the U.S., Kazakhstan, Iran and Algeria. As many as 150 clouds were seen by satellite each month, some of which spread for hundreds of kilometers.

Learn more about the planet-warming power of methane:

Publication of the study in the prestigious journal is the most mainstream acknowledgment so far of the efficacy of using satellites to identify and estimate methane super emissions events. The approach is poised to play a critical role in detecting, attributing and ultimately halting powerful leaks and intentional releases common in fossil fuel operations.“Mitigation of ultra-emitters is largely achievable at low costs and would lead to robust net benefits in billions of U.S. dollars for the six major producing countries when incorporating recent estimates of societal costs of methane,’’ the report said. Among others, the authors include Clement Giron from Kayrros SAS, a French geoanalytics firm, and Riley Duren, chief executive officer of nonprofit Carbon Mapper.Methane is the primary component of natural gas. It has has 84 times the warming power of CO₂ in the short term if released directly into the atmosphere.

By studying oil and gas super-emission events, the scientists also found a functional relationship between large emissions and smaller, less detectable releases across energy networks. That finding is important because, when combined with new satellites scheduled to be launched in the coming years, it could help paint a more complete picture of global methane releases.