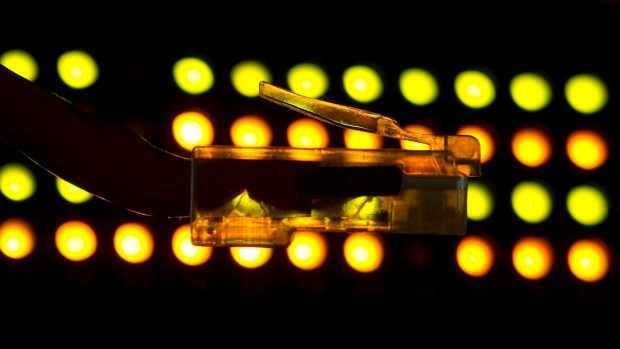 Lights on an internet switch illuminate a network cable in Ottawa , The Canadian Press

TORONTO -- The Federal Court of Appeal has issued a temporary stay of a CRTC decision that seeks to force Canada's biggest internet service providers to provide smaller rivals with access to their networks at new, lower wholesale rates.

Six of Canada's largest internet service providers, including Bell Canada and Rogers, asked the court on Sept. 13 to overrule an August decision by the Canadian Radio-television and Telecommunications Commission.

The phone and cable companies argue that the CRTC exceeded its powers and made errors when it decided had they had overcharged Canada's small- to mid-sized internet service providers under interim wholesale rates set in 2016.

Justice Yves de Montigny decided late Friday that the CRTC's new wholesale rates will be suspended while the case is before the Federal Court of Appeal.

The judge also said that if the large internet services providers lose their appeal, they will be on the hook to repay overcharges collected from their wholesale customers since March 2016.

In its submission to the court, Bell estimated that its share of retroactive payments ordered by the CRTC would be about $100 million. A separate filing on behalf of six cable companies estimated their share would be $225 million.

In agreeing to the temporary stay of the CRTC's order, Montigny writes that the smaller ISPs do not dispute the seriousness of the issues raised in the appeal.

"I am also satisfied that the implementation of the CRTC Order could result in a permanent market distortion which could be extremely difficult to remedy afterwards," Montigny writes.

He concludes that the "balance of convenience favours the status quo" until the appeal is heard but stipulates that the large ISPs must "provide an undertaking" to pay damages if their appeals are dismissed.