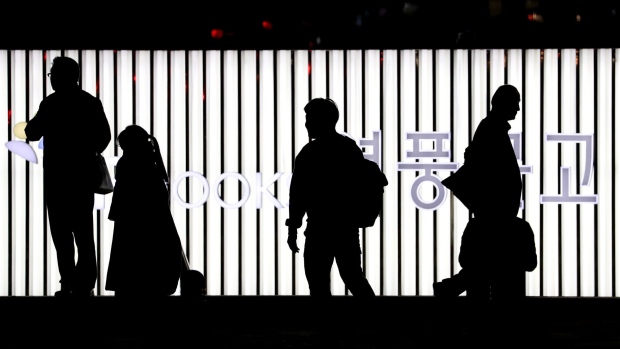 People are silhouetted as they walk past an illuminated neon sign near the Cheonggyecheon stream at night in Seoul. , Bloomberg

(Bloomberg) -- One of South Korea’s largest hedge funds said it has suspended withdrawals from some funds as the firm has been unable to liquidate assets fast enough to meet redemption demand.

Lime Asset Management Co., which runs $4 billion of assets, has halted withdrawals from funds worth 620 billion won ($520 million) in total, Won Jong-Jun, chief executive officer at the Seoul-based firm, said by phone. The requests for withdrawals are only on funds that invest in assets that lack liquidity, not on those buying publicly list stocks or bonds, Won said.

“We made this decision through consultations with regulators in order to minimize the losses of investors,” Won said. “Due to several issues surrounding the firm recently, some investors wanted withdrawals from our funds and we couldn’t liquidate them as fast as they want.”

Rising redemptions at the hedge fund came after local media reported on Korean regulators’ recent probe into the company’s investments in convertible bonds. A call to the Financial Supervisory Service went unanswered. Won declined to comment on the allegations, saying that the investigation is ongoing.

Sales of convertibles, which pay low coupons and let investors convert into stock if the issuer’s shares rise enough, have surged over the past years in Korea amid high demand from homegrown hedge funds. The rising investment in convertibles -- often sold by small- and medium-sized firms without credit ratings -- was also driven by various benefits from the Korean government, which wanted to nurture the country’s young companies amid a flagging economy.

South Korea’s small-cap Kosdaq market is down 6% this year, making it less likely for hedge funds to convert bonds into underlying shares of the issuers.

“Korea’s convertible bond market is still vulnerable -- technically when investors rush for withdrawals, fund managers should sell the bonds to return cash to investors,” said Kim Pil-kyu, senior research fellow at Korea Capital Markets Institute. “But that is not that easy in the private market, which lacks liquidity.”

To contact the reporter on this story: Heejin Kim in Seoul at hkim579@bloomberg.net

To contact the editors responsible for this story: Lianting Tu at ltu4@bloomberg.net, Kurt Schussler