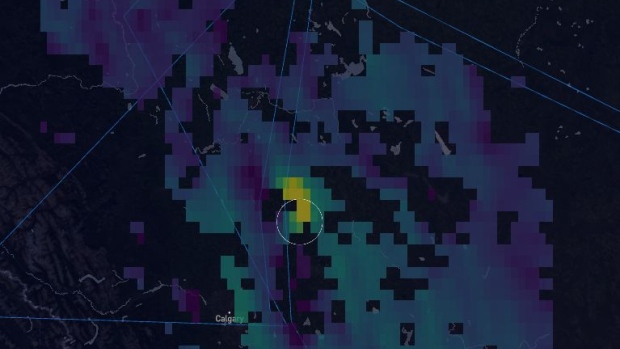 (Bloomberg) -- A cloud of methane was detected by satellite over a natural gas field in Canada, identifying a hidden source of pollution from one of North America’s most prolific production basins.

The emissions rate was estimated at 79 metric tons an hour on April 20, according to geospatial analytics company Kayrros SAS, which found the plume by analyzing European Space Agency data. If the release lasted an hour it would trap roughly the same amount of heat as more than 300,000 cars driving at 60 miles an hour, according to the Environmental Defense Fund. The satellite data didn't show the duration of the leak.

It’s the most severe methane cloud detected in Canada via the satellite data dating back to 2019, and the third-highest rate of emissions identified in North America this year, according to Kayrros. It said the gas was spotted at the south end of the Duvernay shale play, which is part of the Western Canadian Sedimentary Basin. Public and private satellite data has also helped spot methane plumes in countries such as Bangladesh and Turkmenistan.

Halting methane emissions from oil and gas fields has jumped to the top of climate to-do lists globally as nations and companies prioritize the most cost-effective ways to cut emissions. Methane is about 84 times more dangerous to the environment than carbon dioxide in the first 20 years in the atmosphere. It’s also the primary component of natural gas, which means preventing leaks gives companies more fuel to sell.

The gas sometimes leaks accidentally from poorly maintained pipelines, but can also be released on purpose to maintain safety and during testing. Some U.S. drillers intentionally vent methane during oil production if they don’t have the resources to bring the gas to market.

The Canada Energy Regulator said companies it regulates don’t have to inform it when they intentionally flare or vent gas because those releases are part of regular operations and maintenance activity. Accidental releases must be disclosed, but the agency said none were reported between April 15 and April 20 within a 50-kilometer radius of the plume.

Facilities that meet the requirements of Environment and Climate Change Canada’s Greenhouse Gas Reporting Program must report annual emissions from all on-site activities that released methane, the ECCC said in an e-mail.

Nova Gas Transmission Ltd., a unit of TC Energy Corp., did notify the Alberta Energy Regulator of five potential dates for planned releases—also known as a blowdowns—in April, May and June, the agency said. TC Energy said it executed a scheduled release on April 20 at its Beiseker compressor station, roughly 33 kilometers south of where Kayrros identified the methane cloud.

In a statement, TC Energy said it reports data on emissions to regulators and in public forums. The company declined to provide an estimate for how much methane may have been released during the blowdown on April 20, though it said it took measures to reduce pollution. “We cannot confirm if the satellite images you’ve shared are related to this planned event, which was done in accordance within all Canadian regulations,” the company said.

Scientists are just beginning to pinpoint the biggest sources of methane and existing data isn’t yet globally comprehensive. Observations from space can be seasonal due to cloud cover, precipitation and varying light intensity. Satellites can also have difficulty tracking offshore emissions and releases in higher latitudes.