The Bank of Canada has an excellent site that can help investors understand what factors move the Canadian dollar. Canada represents about three per cent of the equity world and about five per cent of the bond world, so the majority of investment opportunity resides in foreign currencies. This leads me to discuss the biggest investment factor in portfolios: currency returns.

Since the world left the gold standard in 1971, the annual impact from currency movements has been in the 5-10 per cent range, depending on the country. I know, most investors do not consider this at all, but it’s at least as large as the average price change in assets (stocks and bonds).

So what makes a currency move? There are two trade accounts that govern the types of money flowing. What is known as the current account and the capital account. The current account factors in data like the difference between imports and exports of goods and services. This is known as the balance of trade. The capital account deals with longer-term investments like securities (stocks and bonds), but also long-term investment. For example, a foreign corporation building a manufacturing facility in Canada. It creates jobs and taxes here, but the profits tend to flow back to the company’s home country. With all of these types of transactions, there is a net amount of money flowing in or out of the country.

When a government runs a balance of payments deficit, there is more money flowing out and the currency will tend to weaken. Canada used to be a big supplier to the U.S. auto sector and our largest export remains energy products.

Our exporting competitiveness is a major factor. A weak currency makes our exports cheaper.  In 2019, 22 per cent of Canadian exports were mineral fuels (oil and gas), and vehicles accounted for 13.8 per cent.

When U.S. President Donald Trump said he wants more jobs in the U.S. and that the nation’s existing trade deals are bad, this is bad news for Canada.

Canada is a big exporter of steel and aluminum too, but neither factor into the top 10 export categories. Incidentally, gold exports (about five per cent) are on the rise with the dollar value on the rise, if not the quantity.

Over the past 20 years, we see that Canada has been less reliant on the U.S. economy for capital flows, but it will always remain the biggest contributor. The biggest increases are China, Europe and Mexico.

We are past the best before date in the energy sector due to lack of government support for investment in our largest export sector and possible global peak demand. It has got caught up in the general reduction in “flight to safety” flows in the U.S. dollar. And that has occurred, in part, because the U.S. is doing so much worse in terms of battling COVID-19, looming election uncertainty, and the massive debasement of the dollar as the Fed’s balance sheet is expanding at lightning speed.

I see the Canadian dollar weakening back below 70 U.S. cents (1.4286) over the next year and therefore I would look to own those U.S. assets via ETFs without a currency hedge.

My overall economic outlook is not bullish. DLR is the Horizons’ U.S. dollar money market ETF that gives exposure to the greenback. If you are sitting in cash because you are worried about elections or market valuation risk, consider sitting in the U.S. dollar. 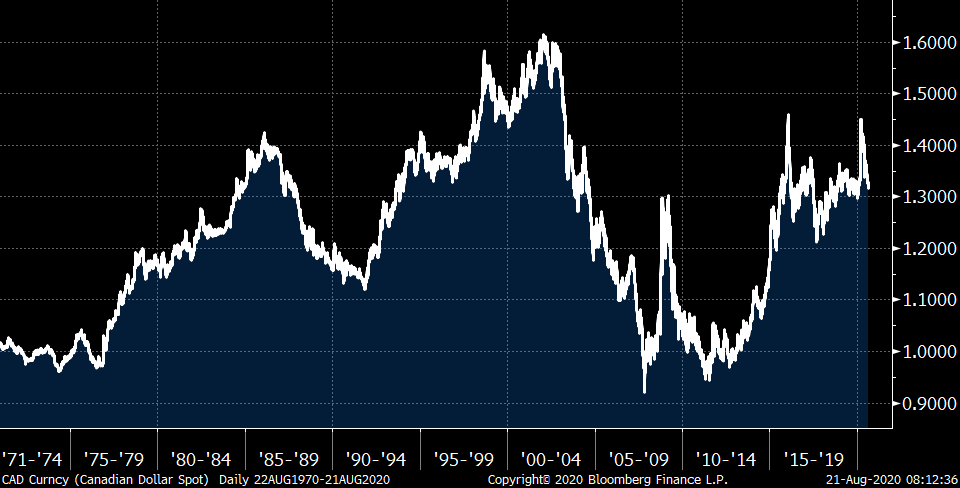