Larry Berman: Growth-value relationship hasn’t been like this since 2000

There are hundreds of investment factors and characteristics that help drive returns. For me, I invest based on relative value or growth, at a reasonable price. I want to tilt my portfolio to the factors that I think will perform better looking forward over the coming years.

There has been a heated debate in recent weeks about the old, value-focused economy and the new economy focused more on growth-oriented stocks. I love technology in general, but it’s not cheap. Just look at Shopify, which is trading at 50 times its expected 2020 sales. Forget the forward price-to-equity ratio, too, since there is no logic there at 1800 P/E-plus. I read a comment the other day that said investors were beginning to worry about valuation… give me a break!

Here is a chart that measures the NASDAQ 100 ETF and Berkshire Hathaway from 1999 to 2002. The last time we saw this kind of divergence between old economy and new economy was at the market peak in 2000. Warren Buffett is widely recognized as one of the best value managers of our era. However, when the valuation of technology got ridiculous in 1999 into the March 2000 peak, Berkshire fell 40 per cent, while the NASDAQ 100 more than doubled.

The talk is beginning to develop that we could see another mean reversion where value starts to outperform. The next chart looks at the S&P 500 growth ETF (IVW) compared to the S&P 500 value ETF (IVE) over the past decade. Value has underperformed growth by a whopping 45 per cent. 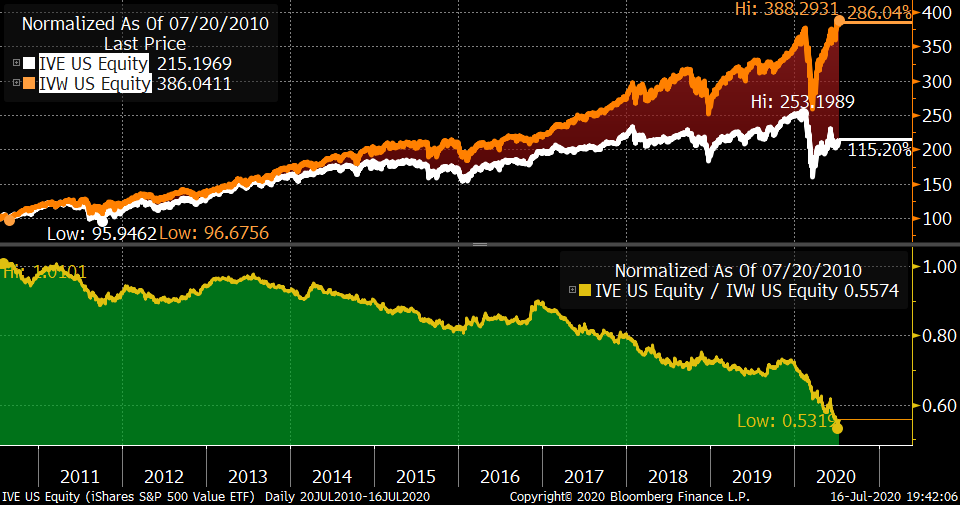 The third column is the growth index 10 years ago. Technology has grown from 29 per cent to over 39 per cent. The new sector called communications services that includes Alphabet Inc.’s Google, Facebook Inc., and Netflix Inc. make up half the index, despite being nearly nonexistent a decade ago. Almost the entire increase in consumer discretionary has been… you guessed it… Amazon.com Inc! So is it growth, value, or simply the FAANG+M stocks that are driving the markets?

The answer to the value or growth question is mostly about the new economy. It’s impossible to say what is expensive in a world of zero-rates and no more price discovery because the market knows the U.S. Federal Reserve will have its back.

So, as we approach historic valuations in growth-versus-value, some caution is clearly warranted. That said, I don’t see the end to money-seeking growth industries compared to others that may be past their best-before date, like energy. Until we get off zero rates, don’t expect financials to lead any time soon, either. Health care has growth potential, but buying that sector directly is the better way to go as opposed to a broad value exposure.