U.S. President Donald Trump will address a joint session of Congress on Feb. 28.

He is expected to talk a little tax — it’s the lower taxes and lower regulations that the markets have been celebrating. But there needs to be a lot of horse trading to get a deal done. Trump would like to see corporate taxes down at 15 per cent and Ryan’s plan is at 20 per cent.

Our sources in Washington say Congress is at 22 or 23 per cent and the Tea Party will only get there if a boarder tax is added to offset the loss of revenue. The average tax paid by U.S. large caps has been around 24 per cent over the past decade and closer to 33 per cent by small caps—the official rate now is 35 per cent. The math is complex, but at the end of the day, a broad boarder tax impacting Canada will have to be implemented to get this comprehensive tax package done. This will take time, as the new Treasury Secretary Steven Mnuchin said over the weekend, that the economic implications will not be felt until 2018 or later. They are hoping to have a deal in place by August—my Washington sources say that is too ambitious.

In Canada, Finance Minister Bill Morneau is set to deliver the federal budget this week and he is expected to raise taxes. The promised Liberal tax cuts on balance have been net tax hikes when you factor in everything they have done so far, including the carbon tax. Word out of Ottawa is that they are cash strapped and looking at every way to raise revenue again. Would you not think they should be tightening the purse strings a little and look to reduce waste rather than continue to increase the inefficient government foot print? More on that in the future as Canada will struggle economically compared to the U.S.

At the end of the day, it is time to make some hard choices. Morneau’s growth council has suggest raising the retirement age—the exact opposite of what Trudeau did with rolling OAS back to 65 to grad a bigger share of the senior’s vote. I will be very disappointed and Canada should be too if we see a budget that raises taxes on Canadians while in the U.S., whether you like Trump or not, are being very progressive and pro-growth thinking.

The divergence in tax policy between Canada and the U.S. should have implications in the coming years. Perhaps it’s time to short Canada and go long the U.S., as much as it pains me to say it.

There are a few ways to do that. One is by going long U.S. dollars. In the ETF world, PSU/U is a premium money market U.S. dollar account. It will yield about 0.5 per cent for the next year, but if the Canadian dollar falls as we would expect over time, then you can make money on the currency. You must be careful here that the rate you get charged to buy and sell U.S. dollar is less than 0.5 per cent because that will eat into potential profits. Another way to play it is with the horizons DLR, which tracks the Canadian-U.S. Dollar exchange rate and is priced in Canadian dollars so there are no FX issues, though it does not pay a yield and it is expensive at 0.6 per cent MER.

For those more aggressive, going long U.S. small caps XSU.T or IWM.N while shorting the TSX by going long HIX.T might be interesting. 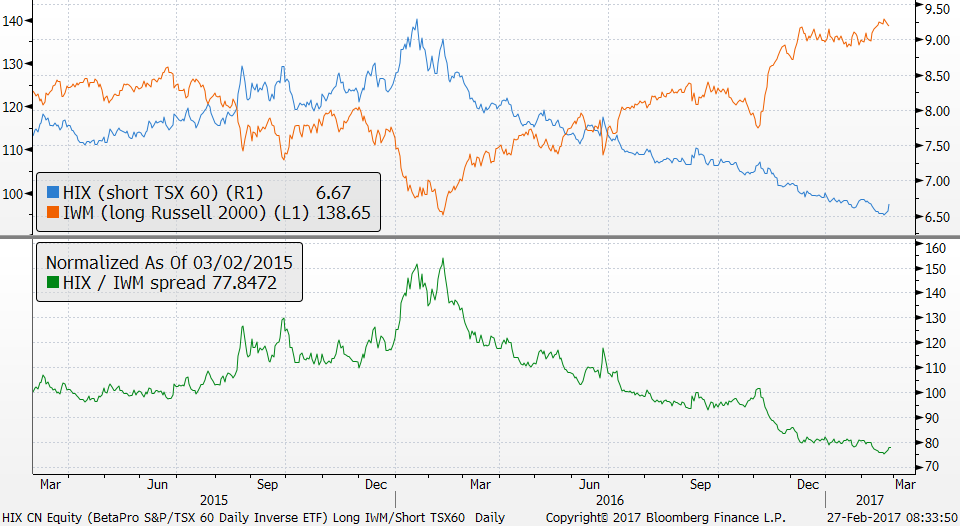 But my concern is that earnings expectations for small caps are small caps are “OUT TO LUNCH” and the market is insanely overvalued. It may just make sense to short them both!

Trailing EPS for the Russell 2000 is $27.62 and the forward 12-month estimate is 51.97 for an 88 per cent growth rate. Looking out two years, analysts add another 40 per cent earnings growth. This is either going to be the biggest earnings boom in history or one of the biggest disappointments, either way there should be a lot more market volatility in the coming years than we have seen in the past few suppressed by central bank liquidity that is quickly drying up.

Building positions and tactical investing is an important skill when managing your own portfolios. Learn how to use techniques like this to evaluate risk and return in how to be a smarter investor in our 7th season across Canada speaking tour. Free registration at www.etfcm.com. Help us raise money to fight Cancer and Alzheimer’s by making a voluntary donation with your registration. Over the past few years, Berman’s Call roadshows have raised over $200,000 for charity thanks to BNN viewers and our sponsors.