Larry Berman: 'Apple has taken off' since announcing stock split

The great thing about ETFs and index tracking is that investors can own the entire index and can benefit from survivorship bias. The good companies stay in the index, the improving companies get added to the index, and the weak ones drop off. The bad thing about owning the index is that they can include companies that used to be strong and now, for whatever reason, they are weakening and dropping off. The transparency of how indexes are created is great for consumers, but in recent years it’s become a reason to front-run the index provider.

There have been some high-profile stock splits in recent weeks that have had meaningful impacts on this idea of front-running index changes and index inclusions.

On July 30, Apple announced a four-to-one stock split, which will happen on Aug. 31. This will reduce the company’s influence on a price weighted index like the Dow Jones Industrial Average by 75 per cent. It will go from being the largest stock at 12 per cent to holding the same clout as IBM, at around 3 per cent. Today, Apple has never been more expensive on a price to sales basis.

A stock split adds no economic value to the company at all. Are you better off exchanging a five-dollar bill for five loonies? Earnings do not improve at all. This is a strong sign of speculative froth.

Getting added to an index is important, too. Indices tracking funds like the S&P 500, are forced to buy the stock or sell it when an index change is made.

On Aug. 10, Tesla announced a five-to-one split. It is estimated that index investors will need to buy close to US$40 billion worth of Tesla shares when it gets added to indices the funds are tracking. The index announcement is expected some time around Sept. 11, one week before any adjustments. Tesla currently trades at 250-times its forward earnings and 1000-times its trailing earnings. At least the company is making money, even though most of it is in government subsidies. Clearly this rally has nothing at all to do with fundamentals and everything to do with hype and froth.

The Dow is dropping three names from the index on Monday: Exxon Mobil, Pfizer, and Raytheon Technologies and has added Salesforce.com, Amgen, and Honeywell. The changes to the index have the biggest impact in the healthcare and industrial sectors. Amgen replaces Pfizer in healthcare, but Pfizer is the lowest price stock in the index. Amgen trades at around US$250 and Pfizer is around US$37, more than seven-times its index weight. It’s a similar story for the switch from Raytheon to Honeywell, which trades at about US$166 to Raytheon’s US$62. But the interesting thing is Apple’s split, which pushes all the other stock weights up as it dips by three-quarters. 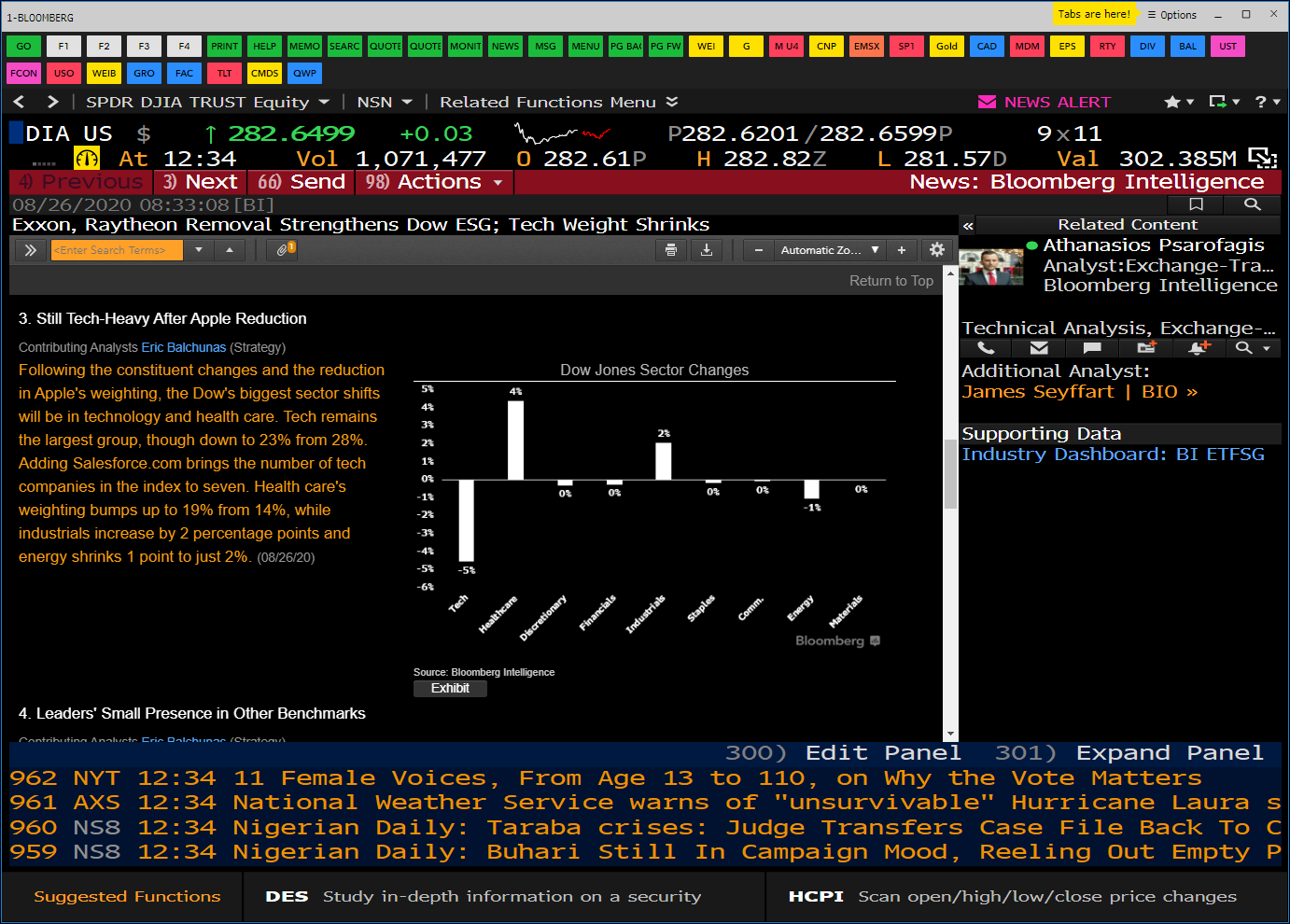 All these events have impacts on ETF investors’ portfolios. It’s important to understand what’s moving the markets to help make a more informed buying or selling decision.