By all metrics, we are in an end of cycle bear market. The yield curve (the cost of money) is our best leading indicator. Historically, bull markets have almost always ended with a recession. There have been exceptions with the market crash in 1987 for example being the most notable investors today may remember where there was no recession. I had just started my career in the investment industry in 1986 on a part time basis while in university. The Greenspan Fed was raising rates in 1987, but there was no recession. There was also no yield curve inversion prior to the crash. After a post crash (rate hike) pause, the Fed kept raising rates in 1988 and 1989 inverting the curve. But it was likely the Gulf War in 1990-91 and likely a bit of ripple impact of the Japanese Nikkei bubble bursting in 1989 that were the recession catalysts. So it’s not always the Fed, but the cost of money matters significantly. 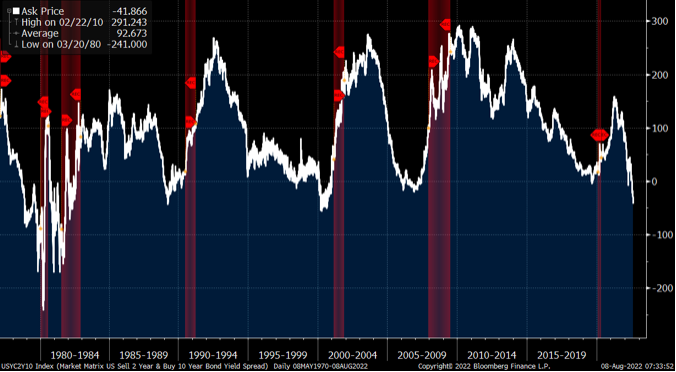 With the amount of leverage in the world today, it has never been more important. One thing that is abundantly clear from looking at the size of debt relative to the size of the economy over the past 50 years is that we have never had to fight inflation in a meaningful way like we did in the 1970s and 1980s with this much debt burden. The last time we did, the level of debt (as a percentage of the economy) was not a major consideration. Today, with the size of the Fed’s balance sheet having bought trillions of debt (QE) since the Great Financial Crisis (2008-2009), raising rates to fight inflation will almost certainly CRUSH discretionary spending and business investment (beyond productivity).

As every economist well knows, the transmission of monetary policy happens with a lag. Just wait until the mortgage refinancing kick in over the next few years. Discretionary spending will likely suffer. At the end of August, the Federal Reserve will meet at Jackson Hole and we expect the FOMC (Powell) will reiterate that fighting inflation and pricing out any idea of an ease in 2023 is their goal.

The current inversion in the curve portends a recession. Given the global restructuring demand for labour and supply side issues exacerbating the current inflation stress, raising rates will kill demand and discretionary spending. It may not be bad on the labour market, but if the Fed wants to kill wage pressures feeding core inflation, the policy mistake is clear. For asset markets, we are in a bear market. In a bear market we should sell rallies (and buy dips), but right now is an opportunity to get more defensive. 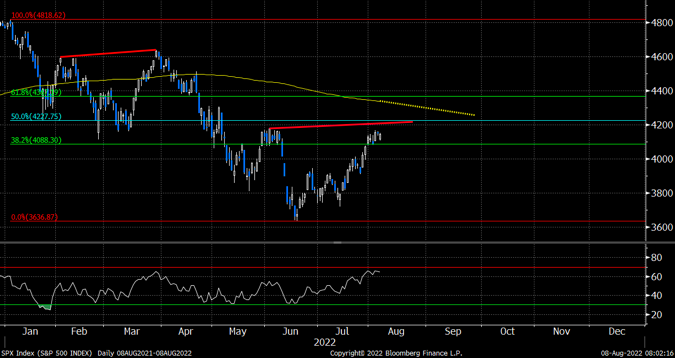 Looking at the chart of the S&P 500, while we are not high relative to the start of the year, we are relative to the recent reports and surprising stickiness of inflation data (past two months). We see another update to CPI/PPI data this week. And while the energy part of inflation clearly will take the headline numbers down, the risk is at the core inflation level. Expectations are for a cooling and the peak inflation narrative is clearly behind the recent rally. The bear market bet one needs to make is the desire of the Fed to stomp out inflation versus the easing the recession fears are pricing into the yield curve in 2023. A question Powell avoided at the last press conference.

There is a huge degree of overhead (get me out) resistance in the charts. We have just started to see analysts take down their earnings forecasts. The slow transmission of monetary policy is likely to take its toll on earnings in the coming quarters and the bet is that we have at least one more leg lower in the bear market before and possibly a few years before the Fed can stimulate without having to worry about inflation. The two partisan spending Bills that will get passed this week by Congress is the last fiscal stimulus we will see until at least 2025 after the next presidential election. It does not likely add up to a bullish near-term scenario does it?