What's the best asset to own during a recession?

When money comes out of equity markets it typically goes into (the relatively safe) fixed-income markets. The flight to safety (historically) is generally into G7 debt markets and the strongest and larger economies of the U.S., Germany, and Japan. Switzerland, not an official G20 member, but its independent currency outside the EU, makes it a special case in capital flows. In terms of sheer size, the U.S. and Japan are by far the largest debt markets with Germany and U.K. also significant. Canada is relatively small by comparison and is not large enough to handle global flows.

Here is the list of the 10-year note rates today and my expectation for yields at the trough of the next recession. Basically, we should see recent low yields hit again, and possibly slightly lower in Europe and Japan. The most room for yields to fall is in the highest-yielding debt market, with the highest quality in the US. Canadian yields are also expected to fall, but probably less than in the U.S.

Inflation rates in most countries are higher than both short-term and long-term interest rates, which tells us that fixed-income markets offer a negative real return (the return you get after inflation erodes your purchasing power). While bonds are a terrible investment for this fact alone, money still moves into safer assets when risk factors increase. Gold becomes particularly attractive the lower yields go.

This next flow of funds out of equities and into bonds likely requires a notable hit to consumer confidence, which is the last leg of recession fears and that is job losses. We have Y/Y recessions in industrial production, trade and housing, but consumption (both personal and government) remains strong. More fiscal spending can mitigate a downturn, but the economic stress on Main Street does not build until job losses start. The quality of job growth over the past year (in the U.S.) has seen a notable decline, but overall, more jobs are being added and incomes are still rising at a higher rate than inflation, which is a good sign.

We expect a big push in the coming years to a bit less of a focus on monetary policy (targeted interest rate movements) and more emphasis on fiscal policy (deficit spending) to boost economies. The trouble with that is while an increase in debt levels can boost growth, it will NOT likely change behaviours of consumers that increasingly feel the stress of personal debt burdens and stagnating incomes.

Governmental balance sheets are in very bad shape in most countries (though Canada is a bit better than most federally, not provincially). So at the cost to future generations, fiscal policies are likely to be ramped up globally to boost growth. The additional debt levels can theoretically put upward pressure on interest rates to be sure. The question will be can economies handle higher rates, which would serve to hurt growth as debt burdens grow. Bottom line, central banks will likely be forced to monetize debt as the only option in the coming years/decades. Natural growth rates of population and productivity are challenged given current and expected demographic trends.

Governments should be focusing policies and investment on increased productivity measures that can improve natural growth rates rather than even more credit fueled growth that monetary policies tend to do. Japan has been the leading indicator of debt and demographic growth challenges and what has not worked. This falling rate trend is not over, not even close. 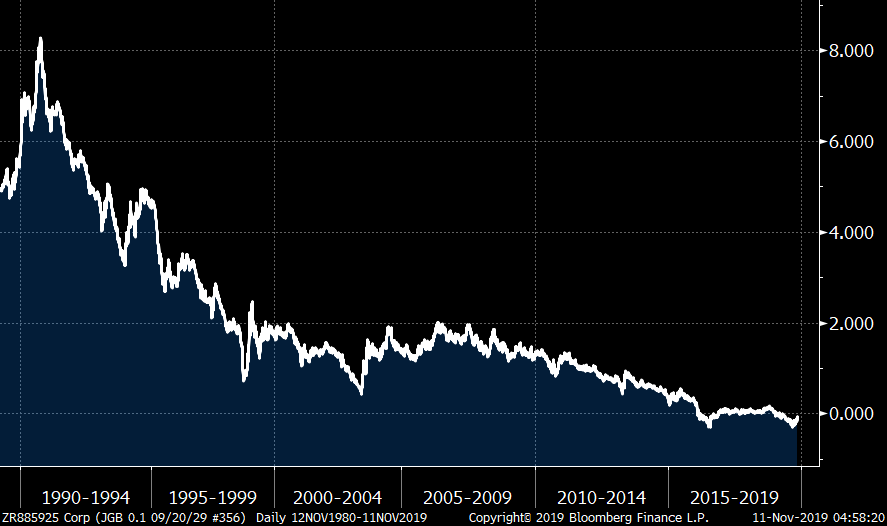 One example of the growth and productivity hurdle is clear. It is estimated that the retirement age in Japan may need to go to 77 to be able to maintain a worker to retiree ratio or 17 million young working age immigrants will be needed by 2050. This is a toxic outlook for growth. Low interest rates and more spending can only do so much when you are fundamentally shrinking with falling productivity. But low rates are required due to the massive existing debt and adding to is WILL NOT HELP EITHER.

Less desirable industries, such as agriculture and construction, are more threatened than others. The average farmer in Japan is 70 years old and about a third of construction workers are 55 or older. Only one in 10 are younger than 30. These structural problems with demographics are most acute in Japan. Immigration is an important social issue today and it will only intensify in the years ahead as older economies in the developed world seek higher growth rates.

We are in the closing stretch of my current roadshow (Fixing Fixed-Income). Bond yields are likely to remain low for many reasons, one of which are global demographics and the other is the massive existing debt burden. As we age, we need our money to last longer and low real interest rates are a huge tax on incomes. And while rising stock markets help, they only really help the top third of the population that benefits from exposure. So the average person is doing OK, but the median person is increasingly worse off. The bottom half of people have little to no impact on the wealth effect, but are hurt most from low rates in retirement. The safe bond part of your portfolio is broken, perhaps permanently impaired. You will need to learn to get creative to enhance your REAL return on your fixed-income.

Register free at www.etfcm.com and make your donation here