The government shutdown. It’s happened before – a lot! In 1995-96, the government was shut down for one month.

The Congressional Budget Office estimated it cost the US economy about 0.5 per cent of its GDP that quarter. So, from a major economic perspective it’s something to consider … but we do not need to worry too much about it from a market perspective. It would be extremely unlikely a shutdown would last longer than a few days. The median of the shutdowns was three days and the average was six, so a week might cost 0.1 per cent of GDP. Based on how polarized Washington is these days, it would not be too surprising to see someone hold someone hostage for some leverage and blaming the shutdown on the other party.

For now, though, the Republicans lose more with a shutdown than the Dems. The best bet will be a last-minute continuing resolution so they can negotiate a better deal for both sides. It will mean some uncertainty in the next few weeks until it gets done.

Back in 1995-96, the market response was a pause and when the shutdown was over, markets rallied after a few days of weakness. Back then, valuation was a problem too. Remember the famous Alan Greenspan speech about irrational exuberance on December 5, 1996 when he wondered if the valuation was getting ahead of the fundamentals. Today, generally accepted accounting principles (GAAP) earnings are as expensive as they were before the crash in 1987 and in 1996 at 25 times earnings. When adjusted for 15 years of excessive share buybacks, we are more expensive than the peak in 2000. So, while a government shutdown may not mean much for the market, we are in the very late innings of the game and it’s just prudent to be more defensive in your portfolios. 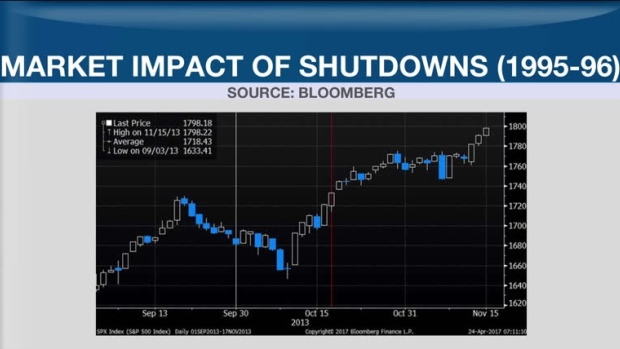 The most recent shutdown was in Oct. 2013. As you can see, there was a market impact for a few days, but it did not last. 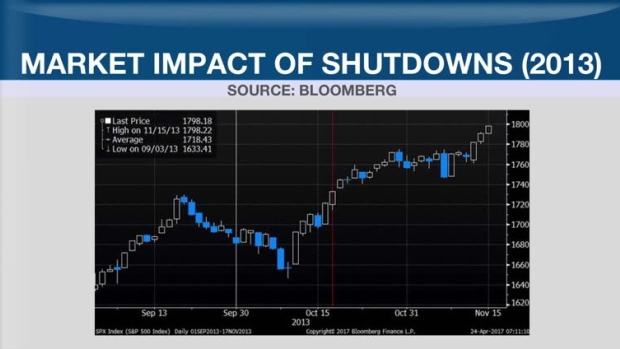 According to ACG Analytics Congress will avert a shutdown, but to do so Republicans will need to accept that despite controlling the House, Senate and the presidency, they cannot insert policy changes into the appropriations process with strenuous Democratic opposition. Under the Congressional Budget Act of 1974, Republicans may only need 51 Senate votes to pass a budget, but they still require 60 votes in the Senate to pass appropriations bills and that requires votes from Democrats.

This means that Republicans cannot use the budget process to insist on defunding Planned Parenthood (using federal dollars to pay for abortions led to the second ever government shutdown in 1977 and to several thereafter), cannot specifically appropriate money for a border wall, or deny Federal funding to “sanctuary cities” as an explicit provision of law.

It will be interesting over the next week or so on how all this plays out, but the implications will mean more for the proposed repeal-and-replace of the Affordable Health Care Act and tax reform than the debt ceiling and a budget. Some last minute drama later this week is likely where they could pass one week continuing resolution before doing a longer one. The real risk is Sept.-Oct. where you have Trump's first real budget potentially combined with the debt ceiling.

We have one more Berman’s Call event left for this series. Tactical investing and assessing macro risks are an important skill when managing your own portfolios. Learning how to use techniques to evaluate risk and return are important. Especially late in the investment cycle. Learn how to be a smarter investor in our seventh season across Canada speaking tour. Free registration at www.etfcm.com. Help us raise money to fight cancer and Alzheimer’s by making a voluntary donation with your registration. Over the past few years, Berman’s Call roadshows have raised over $230,000 for charity thanks to BNN viewers, our sponsors, and our partners.