A central bank gets behind the curve when it is not raising interest rates at a pace fast enough to keep up with inflation. Market based inflation expectations are still running with the idea that the Fed is correct, and these are transitory forces. The Fed’s preferred measure of future inflation is called the 5-Year/5-Year inflation swap. The series (orange line) measures inflation expectations for the five-year period beginning in five years from now. This measure is near the highest point in the past five years. Current inflation measures are running much hotter than this, which suggests that the market believes it’s transitory.

Last week we heard from six Federal reserve presidents, and they all suggested tapering should start soon and proceed faster than slower. While Chairman Powell acknowledged a taper later this year, it was with far less imminent language. He was very clear that a rate hike was not linked to tapering like what we saw in 2018, the last time the Fed made a major policy mistake. Here is the key quote from his speech.

"We have said that we would continue our asset purchases at the current pace until we see substantial further progress toward our maximum employment and price stability goals, measured since last December when we first articulated this guidance. My view is that the "substantial further progress" test has been met for inflation. There has also been clear progress toward maximum employment. At the FOMC's recent July meeting, I was of the view, as were most participants, that if the economy evolved broadly as anticipated, it could be appropriate to start reducing the pace of asset purchases this year. The intervening month has brought more progress in the form of a strong employment report for July, but also the further spread of the Delta variant. We will be carefully assessing incoming data and the evolving risks. Even after our asset purchases end, our elevated holdings of longer-term securities will continue to support accommodative financial conditions."

Obviously, they did not intend to make a policy mistake in 2018. But the reaction to rate hikes and less liquidity crushed “financial conditions” (read the S&P 500). If anything, the bubble is much bigger today and the stock market sensitivity to rates and debt monetization is even more acute.

Today, the bond market is not telling us that inflation is a problem. Long yields (blue line) have come in notably in recent months. But the primary reason seems to be that the Fed is buying more debt than the Treasury is issuing. This is going to change in the coming months as the debt ceiling is raised and the Treasury General Account (top green line) is replenished at the same time the Fed starts to taper (lower dark green line). The market is not priced for this perfect storm that is ahead.

In 2017 and 2018 the Fed was raising rates and reducing the size of the balance sheet. Powell referred to it as “autopilot.” He was very clear that they will not make that mistake again. The projected deficits for the next decade (this assumes no new stimulus bills that could add trillions), is still running at about four to six per cent of GDP. All this bond supply will likely put upward pressure on rates. The inflation debate will rage for decades into the future, but what is clear to us is that both monetary and fiscal policies as we know them will need to change. If debt monetization is the only solution, then real assets and equity markets may just keep inflating too. 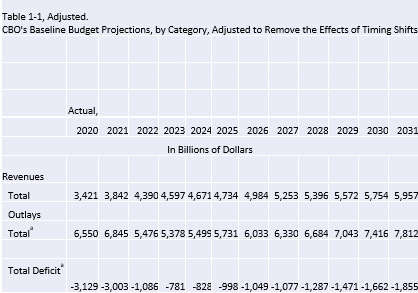