Larry Berman: What do collapsing bond yields mean for your portfolio?

"We have a bond market where one-quarter of the universe trades at a negative yield. The long bond yield just went negative in Germany (the entire yield curve in Switzerland has been negative for a while). Over half the world’s bond market is trading below the Fed funds rate. Investment grade bonds, on average, are below zero in the euro area. This is completely abnormal because it reflects abnormal economic, financial and political backdrop." – David Rosenberg, chief economist and strategist, Gluskin Sheff, Aug. 9, 2019 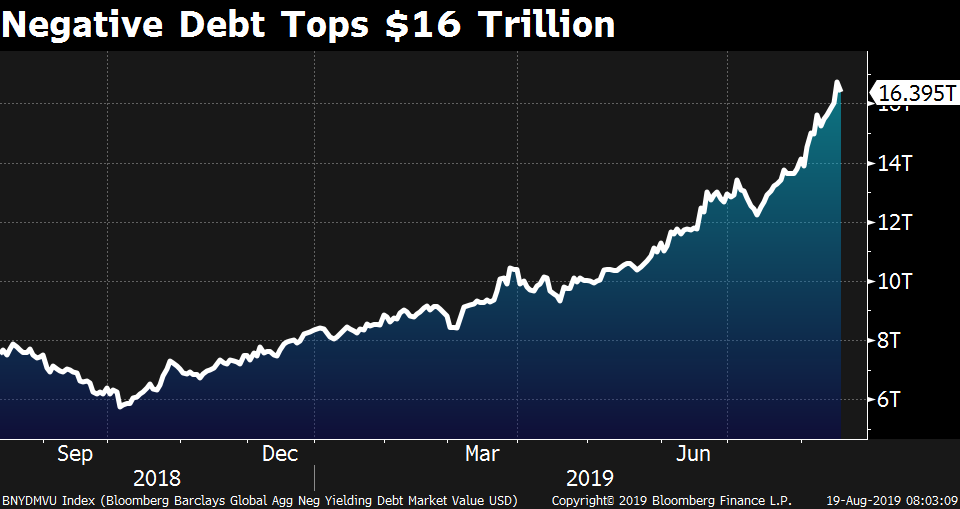 Rosenberg hit the nail on the head when he referred to “abnormal” conditions. I continue to be staggered by the plethora of talking heads that say the economy is “just fine.” There is nothing normal or fine about why the world economy is growing over the past decade. It’s leverage. We have the biggest credit bubble ever. The traditional way of thinking about your portfolios will change dramatically in the years to come. Bond yields are low and will likely stay low until inflation rears its ugly head.

Why is there no (beyond a few pockets) inflation when we are at full employment? We have never seen this in past cycles? In part it’s policies that have pulled forward demand (read increase in debt loads). In part, it’s demographics and longevity where people on average have not saved enough to keep their standard of living in retirement years. A big reason is that real incomes have not risen much at all in the U.S. and other developed nations over the past 40 years. In part, a concentration of wealth in the top 10 per cent versus the bottom 90 per cent. The average person is doing just great, but the bottom half is not. 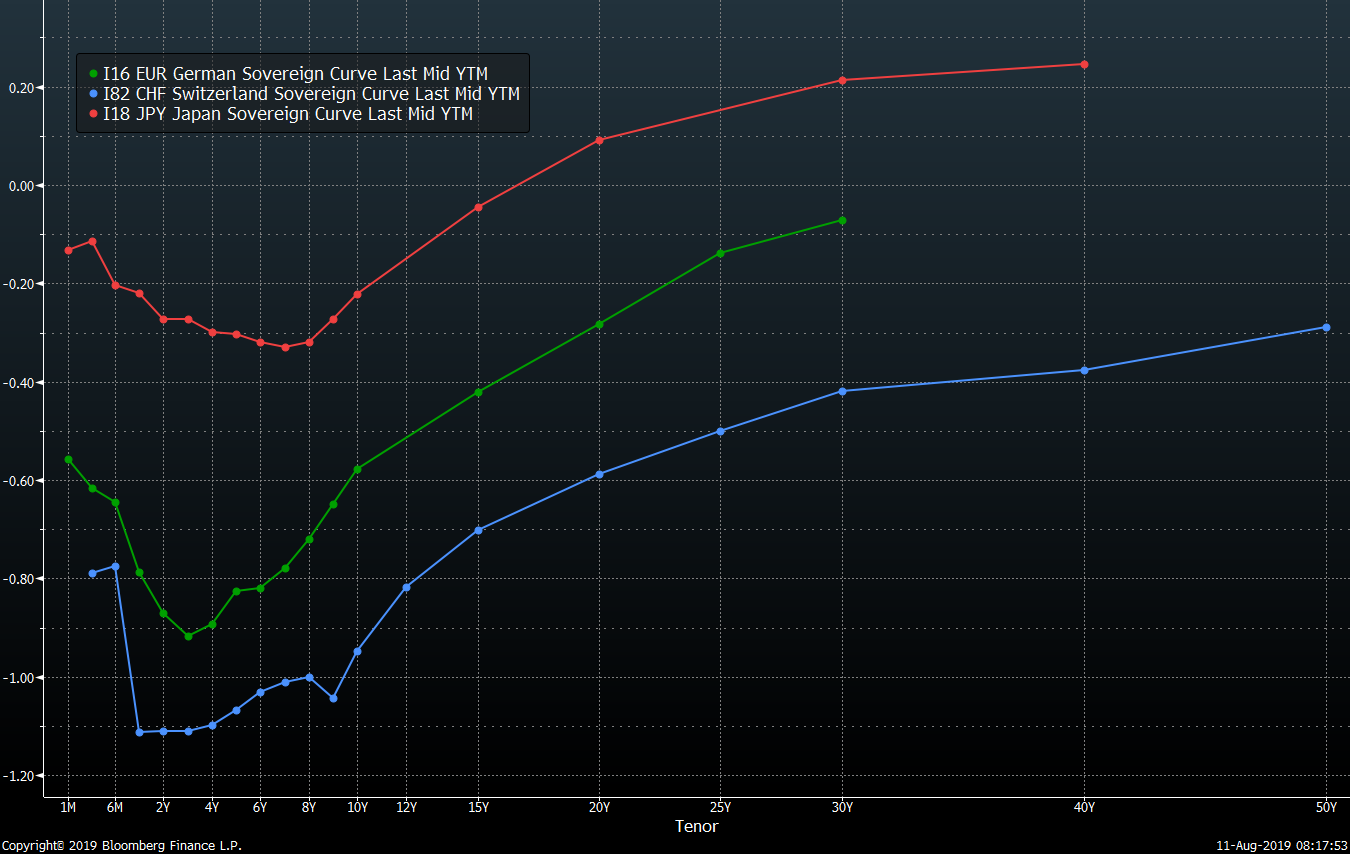 It seems increasingly likely — no matter who wins the 2020 U.S. election — that we are going to see even more debt. We will likely either see more than $2 trillion of deficit spending to boost the economy via infrastructure (in the event of a Trump win) or a green new deal (if the Democrats win). We will most certainly see the U.S. Federal Reserve push interest rates to zero (or below) again as a recession takes hold, whenever that plays out as the yield curve is now portending.

Negative rates have been toxic for banks in Europe and Japan and if you think that can’t happen here too, well, complacency has always been a cornerstone of owning our great Canadian banks. They have been a cornerstone of all Canadian portfolios for decades. I’m not forecasting a bad outcome, I’m just saying that negative rates are toxic as we can see in the chart of Japanese and European banks. I would highly recommend the BMO Equal Weight Bank ETF ZWB for those that do want exposure, as the additional yield from the covered call exposure will help increase your yield. I do not have any direct exposure to Canadian or U.S. banks at the moment. 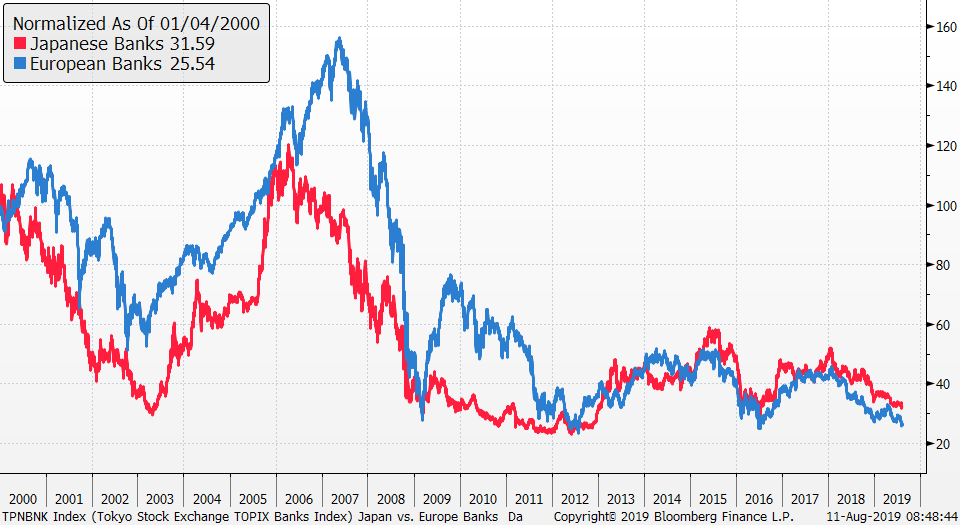 Getting balance in your portfolios with traditional bonds that globally now yield less than 1.5 per cent is difficult. In fact, with bond yields so low, they are more risky (volatile) than they have ever been. Historically, the older you are the more fixed-income (lower risk) you should have in your portfolio. With the entire world of fixed-income having a real yield (after inflation) of negative given a global inflation rate of about two per cent, buying traditional bonds is a losing proposition for most investors. And be very carful with leveraged credit (alternative) bond funds as they are extremely risky at this point in the cycle. Do some research on Long-Term Capital Management in 1998 to find out why. 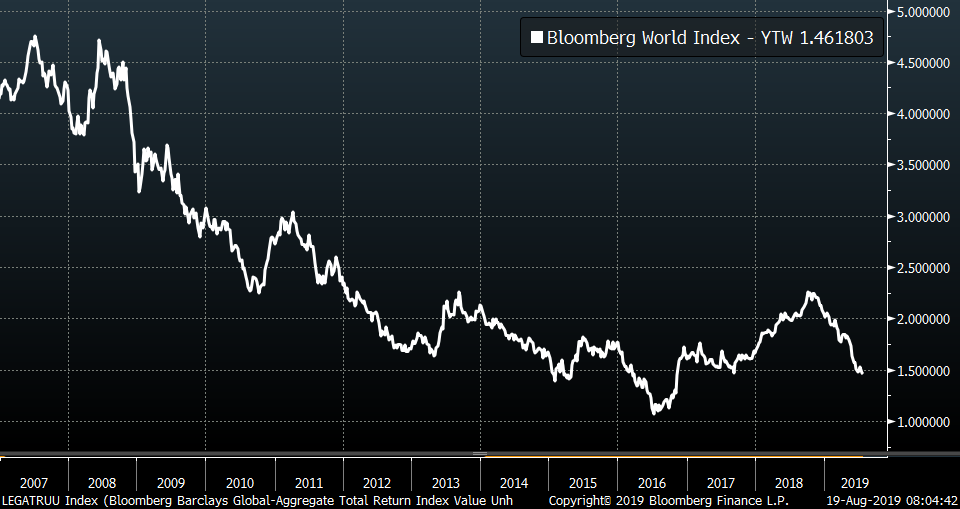 As long as these trends persist, look for global banks to underperform and bond yields to continue to fall in North America. With real rates of return currently negative and expected to get more negative, look for gold to shine. Long bonds (ZTL.T, ZFL.T, TLT.N) will likely do well despite being close to all time low yields. Learning how to use other asset classes in your portfolios other than equities can be helpful navigating difficult market environments. When the history books are written a decade or more from now, we will look back at this period like we looked back at Japan, German and Swiss yields today and scratch our heads and wonder what were we thinking. Central bank policies are causing massive distortions of risk and frankly we’ve never been more concerned about in our 30+ years investing. Our favourite strategies these days include options for hedging and generating extra yield.