The shape of the yield curve tells us a lot about investor expectations about the future. As of Sunday night, the odds of the FOMC raising the overnight rate were 97 per cent according to the derivatives tied to the Federal funds rate. In fact, that is the last rate hike the market has priced in at this point, despite the Fed suggesting rates will be closer to 3.00 per cent by the end of 2018.

Since the FOMC started raising interest rates in December 2015, the yield curve has been flattening. The one exception was in the weeks after the Trump election where the markets were excited about his promised growth and stimulus plan that is still quite the mystery. A flattening curve in a combination of short-term interest rates moving up and longer-term interest rates falling suggests that the rate hikes are likely to hurt growth and cool the economy. 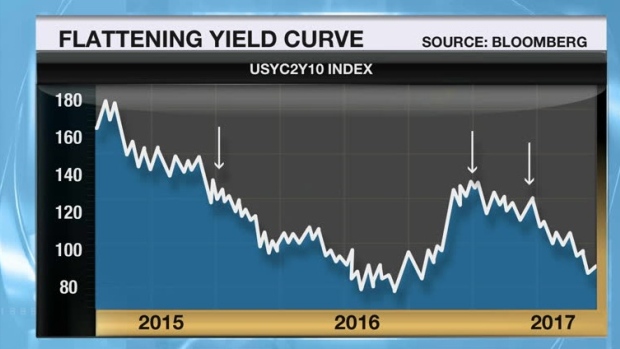 I have said for years that interest rates would have difficulty normalizing. I have gone as far as to say that rates may stay low on average for decades to come. One reason we think so is that the amount of debt in the world today relative to past cycles is off the charts. Total debt-to-GDP levels globally are toxic! A 25 bps rate hike today has the impact of the 75 bps rate hike of past cycle due to all the debt.

For some perspective, the Obama administration borrowed about US$9 trillion almost doubling the size of the federal debt as a percentage of the economy. Corporate balance sheets have been levering up, too, using the funds to buy back stock. A small rate hike today in dollar terms is more than double the hit it used to be. And, on a percentage basis going from zero to 1.00 per cent is much tougher on people and corporations who are only able to afford things because of the ultra-low rates. We are seeing housing slow down, increased defaults on car loans and the middle class that have been stretching to keep up will be hurt the most. 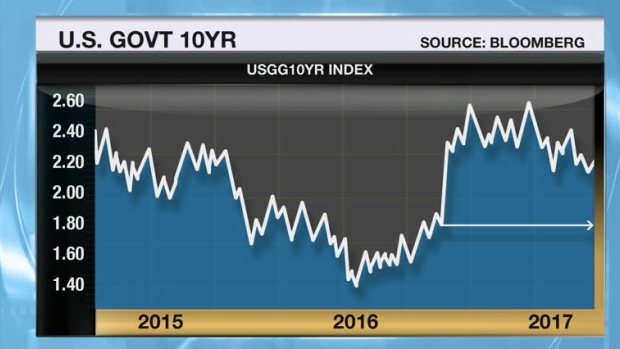 I learned a long time ago that bond investors were far smarter about the outlook for the economy than equity investors. The behavior of the yield curve suggests we get even more cautious as opposed to the benign exuberance we are currently seeing in equity markets. Perhaps last Friday’s aggressive 2.5 per cent decline and reversal in the Nasdaq 100 ETF (QQQiv.OQ) is a sign that equity investors are getting the message. I suggested previously to buy longer-term bonds to protect your portfolios. If we see US 10-year yields remain below 2.40 per cent by the end of the week, odds are good that we see them hit 1.80 per cent (where they were before Trump election) before they hit 3.00 per cent as Wall Street consensus would make you believe.

The Street has been wrong on bonds for 15 years, I do not see what that would change now. My favourite way to play US long bonds is with the iShares long-term 20+ year Treasury bonds (TLT.OQ).