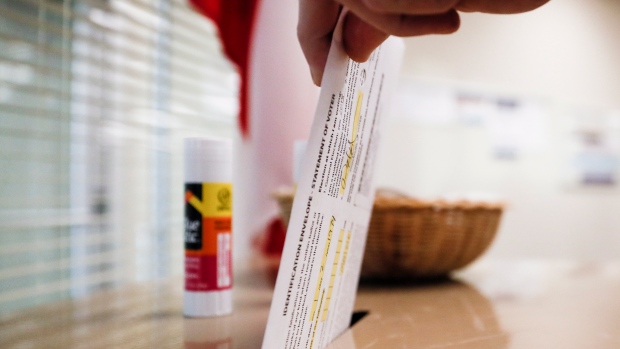 In this Oct. 10, 2018, file photo a voter casts their ballot at the Hamilton County Board of Elections on the first day of early voting in Cincinnati. , AP Photo/John Minchillo, File

I've been asked several times during the past week, “What happens if Trump sweeps or loses both houses of Congress? What if the pollsters are wrong like they were about Trump in 2016?” According to Nate Silver of www.fivethirtyeight.com, the guy who was very accurate with his predictions up until 2016, when the U.K. voted in favour of Brexit and Trump was elected as U.S. President, we would have to see a statistical fluke in the polling with odds of a one-in-80 chance that Congress does not split.

The most likely outcome based on the pollsters is gridlock where the GOP gains a few seats in the Senate but loses control of the House. In that scenario, which the market expects, we can expect the focus to remain mostly on trade with China for the next few months. In the odd case that something else happens, we can expect a test of the price extremes of recent months. The market would initially cheer a GOP sweep and we would rally, but I’d be shocked if we could see new highs. The market would like more middle-class tax cuts and infrastructure spending some time in 2020. More control by the Democrats could see last week’s lows retested, but it’s doubtful that we would go much lower. The Democrats want infrastructure spending too. In either case, the Federal Reserve may need to be more aggressive. Gridlock, at this point, the most likely scenario, would be best for market stability.

The good news is, you have options.

There are basically four ways that you can take a position with ETFs.

Writing puts-to-buy positions is one of my favourite strategies when you are less certain about the outlook to generate yield while you are waiting. 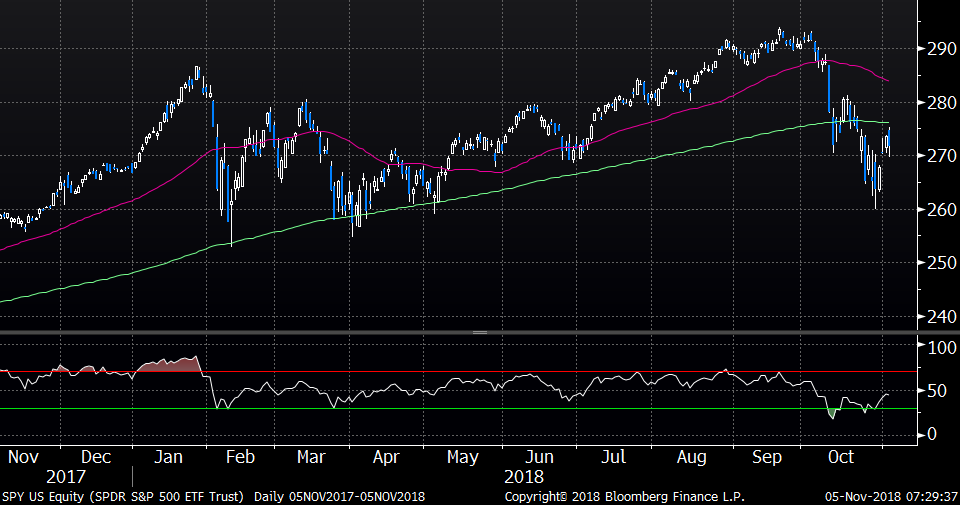 The low last week for the S&P 500 (SPY) ETF was a bit below 260 and represents a good short-term entry point. Writing a put for Nov. 16 yields 1.11 or 1.11/271.89 = 0.41 per cent (over the next 11 days)  and 3.89 (1.43 per cent) to Dec. 31, plus what you would earn on your cash (about 2 per cent annualized, so 0.17 per cent monthly). If you were worried about a more major decline in 2019/2020 recession decline (I think 1800 is a good downside potential), selling a 180 put for December 2019 to buy the market at 1800 yields and extra 0.81 per cent on top of a more than two per cent in a money market ETF like SHV. You can generate a near three per cent return over the next year, which is well more than the 1.9 per cent dividend the S&P 500 offers. Those of you with FOMO (fear of missing out) may face anxiety over not being able to  keep up with market returns. Emotional responses like this will inevitably kill your long term returns because you will at some point start chasing the market with a long position rather than strategically investing for the risk levels you are more comfortable taking.

Using options can limit your upside, but it enhances your yield while you rest easy. Out of the Money (OTM) put-write strategies work best when the markets are sideways or lower, or for slow growth in the market overall. In this example we created on Aug. 30 to demonstrate what happens to these strategies during high-volatility periods, we created a portfolio for each strategy to compare. The SPY closed that day at 290.30. The SPY 290 put for Dec. 21, 2018 was at $7.86 or a yield of 2.89 per cent. The SPY CALL for December was $8.14 for a yield of 2.99 per cent. The five per cent OTM December 276 put was trading at $4.23 or a yield of 1.56 per cent. With options yields, most of the value is realized in the last week or two as the time decay really kicks in. 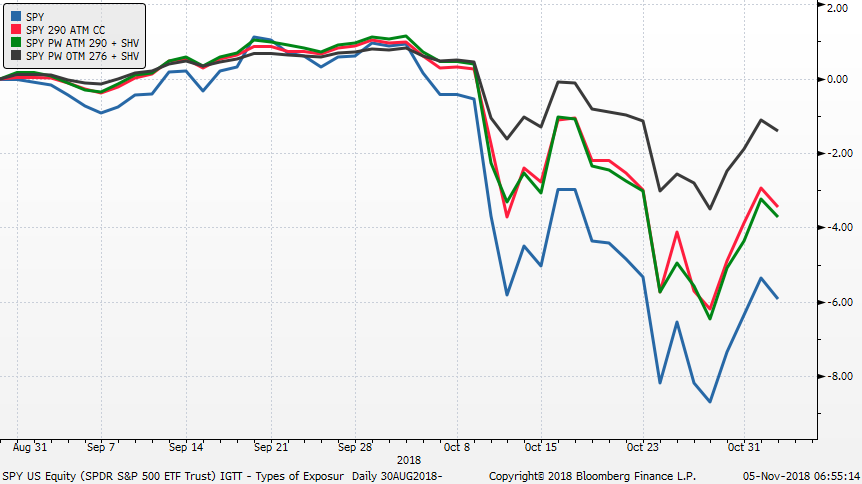 A key strategy with these types of positions is your ability to change. Once the market sells off to the level you are comfortable with in taking the long risk, then buy back your put and GO LONG young man (or woman)!

Our fall roadshow dates are out. Come out and find out how to profit while protecting in the longest bull market of all-time, where I will look at some of my top sector ETF picks for the next few years and teach you how to build balanced portfolios using less risky options strategies that will work better in the next few years. Register fir free at www.etfcm.com and as always we ask for volunteer donations to one of our two favourite charities: Children’s cancer research at the Sick Kids Hospital and Alzheimer’s and dementia research at the Baycrest Hospital.