The Congressional Budget Office (CBO) updates the 10-year budget forecast each month, but the most recent release is absent a few key figures.

The current US$1.9-trillion COVID-19 relief bill has not been signed into law yet, so it is not in the latest release. It will make the debt and deficit numbers worse. The Biden administration is also expected to put forward a 10-year green infrastructure jobs act in the US$3-5-trillion range in the third quarter. That is not in the below numbers either. 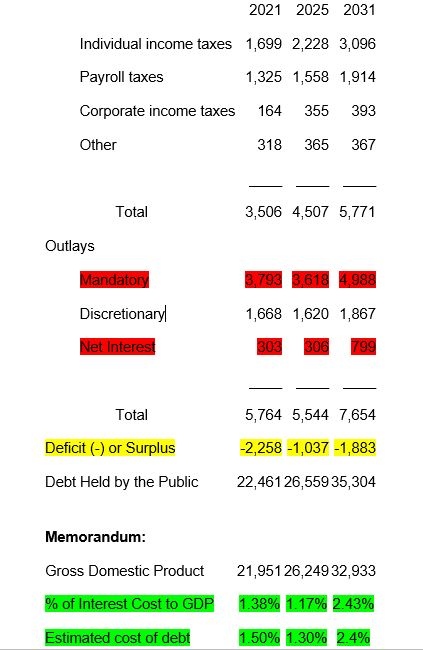 There are more than a few alarming trends in the above figures.

On the revenue side, individuals pay the lion’s share of taxes. Tax rates will be going up to offset the deficits. Raising corporate tax would help, but it’s too small. If the world embraces the modern monetary theory model of printing money to pay for the excess spending (sadly this is where we are heading), then control of the money supply with be a permanent quantitative-easing (QE) model. Yes, debt monetization, jubilee or whatever you want to call it. A government bond issued with zero interest is fiat cash.

It seems to me that the Federal Reserve has no choice but to keep QE going to the tune of at least US$1 trillion per year, and if bond yields do sense inflation, they will need to affect a degree of yield curve control.

The mechanics are complicated, but the message is that low rates will be needed so that the cost of paying the interest cost of the debt is not a growing burden on the tax base. And perhaps more importantly, asset markets – read: financial conditions in Fedspeak - are stable. The markets will hear and react to the idea of tapering asset purchases and higher yields like they are experiencing now. But, like every other time - for decades - the Fed will need to step on the gas at some point or risk a meltdown in risk assets that are inflated by those same low rates. Welcome to the moral hazard economy — it’s not going away.

Our Spring 2021 weekly Berman’s Call virtual roadshow is back. Register at www.etfcm.com or at www.investorsguidetothriving.com. The format of this series will be a 30-40 minute weekly presentation that changes each week to current market developments and a 30-40 minute Q&A. This week we look at money supply and inflation and what that might mean for asset markets.