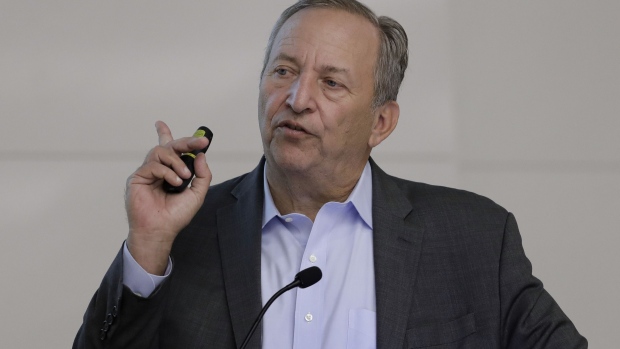 Lawrence "Larry" Summers, former U.S. Treasury secretary, delivers a keynote speech during the opening session of a workshop hosted by the Bank of Japan (BOJ) and the Bank of Canada (BOC) at the BOJ headquarters in Tokyo, Japan, on Friday, Sept. 30, 2016. The new BOJ policy framework is headed in the right direction, Summers said at the event. , Bloomberg

(Bloomberg) -- Former Treasury Secretary Lawrence Summers said the Federal Reserve has failed to account for its mistakes and to realize the damage to its credibility after the latest inflation data dashed hopes that a peak had been reached.

“It’s pretty clear that peak-inflation theory, like ‘transitory’ theory is kind of wrong,” Summers told Bloomberg Television’s “Wall Street Week” with David Westin. “The Fed’s forecasts from March, saying that inflation would be coming down to the 2s by the end of the year was, frankly, delusional when issued, and looks even more ridiculous today.”

Summers spoke after a report showed that consumer prices jumped 8.6% in the year to May, the most in 40 years and exceeding forecasts.

“The Fed is saying the right words, but I think they don’t appreciate the extent to which” mistakes made last year and into early this year did damage, Summers said. “Those mistakes mean that they don’t fundamentally have credibility.”

Given the lagged time periods it takes for Fed policy actions to take effect, “there’s some real disadvantages to delay” in tightening policy, said Summers, a Harvard University professor and paid contributor to Bloomberg TV.

Fed policy makers have telegraphed they intend to raise the benchmark interest rate by half a percentage point in June and July. Vice Chair Lael Brainard also indicated last month she was skeptical about any case for a pause in hiking in September.

“The debate has been between 25 and 50 basis point moves a couple months from now,” Summers said. “I think a more fruitful deliberation would be between 50 and 75 basis points.”

Summers urged the Fed to investigate why officials’ forecasts were “so dramatically” and repeatedly wrong. He faulted the central bank for having a homogeneity in its forecasts, and criticized its main mathematical model.

The Fed’s so-called FRB-US economic model “is not really fit for purpose in terms of inflation,” he said.

The former Treasury chief cautioned that major components of the consumer price index could accelerate in the months ahead. Shelter costs could be rising by 8% later this year. Medical care is also still “looking low,” he said.

Summers reiterated that “a soft landing’s not going to be easy” -- that is, for the Fed to bring inflation down without triggering a recession.

He counseled against an emergency rate hike ahead of the scheduled Wednesday decision. That “would look panicked and is an unwise strategy.”