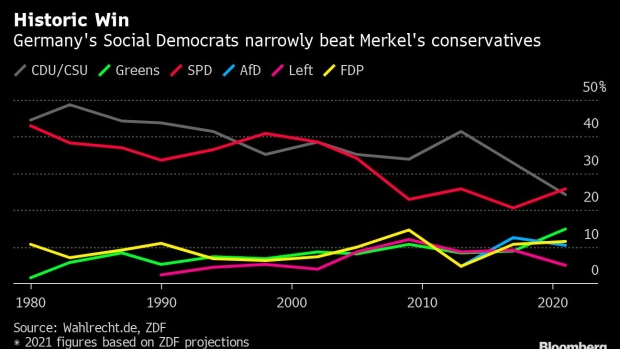 BERLIN, GERMANY - SEPTEMBER 27: Armin Laschet, chancellor candidate of the Christian Democrats (CDU/CSU) union, speaks at the press conference at CDU headquarters the day after federal elections on September 27, 2021 in Berlin, Germany. The CDU/CSU came in a close second behind the German Social Democrats (SPD), setting the stage for what will likely be arduous exploratory discussions and negotiations between the four leading parties over the next several months before the creation of a new coalition government. (Photo by Maja Hitij/Getty Images) Photographer: Maja Hitij/Getty Images Europe , Photographer: Maja Hitij/Getty Images Europe

At a meeting in Dusseldorf, the head of Angela Merkel’s Christian Democrats told party officials that he would resign as North Rhine-Westphalia’s leader at the end of October, his spokesman said Tuesday. He agreed to accept Hendrik Wuest, the state’s transport minister who he had previously opposed, as his successor.

While Laschet was expected to stand down as leader of his home state, he had looked to retain more control over the transition. At a press conference in Berlin on Monday, he indicated he would continue in his role as state premier even during potential coalition talks.

Laschet is struggling to maintain authority after the conservative bloc tumbled to its worst-ever election result. The 60-year-old has yet to congratulate Social Democrat Olaf Scholz on his election victory, as he holds out hopes of forming a government. The SPD also beat the CDU in North Rhine-Westphalia, a bad sign ahead of state elections next year.

The CDU chief’s standing has become increasingly precarious. Markus Soeder, who heads the sister CSU party in Bavaria, said Monday that “no claim to form a government comes from a second place finish.”

Ellen Demuth, a CDU lawmaker in the Rhineland-Palatinate regional parliament, openly called on Twitter for Laschet to resign, saying if he clung on to office he would cause further damage to the party.

Laschet’s next battle will take place in Berlin, where the CDU caucus meets later on Tuesday to vote for its leader in the new parliament.

Ralph Brinkhaus aims to be re-elected for a full one-year term. But Laschet is hoping to persuade lawmakers that the mandate should be limited because he wants to retain the option of seeking the job for himself if he fails in his bid for the chancellery, according to an official familiar with the discussions.

Brinkhaus could also face challenges for the party’s top legislative post, with Health Minister Jens Spahn and former Merkel antagonist Friedrich Merz potential contenders, said the person, who asked not to be identified because the discussions are confidential.

The power struggle in the CDU could improve Scholz’s chances of forming a government with the Greens and the pro-business Free Democrats, who have started initial discussions in an effort to bridge significant differences on policy.

With the conservatives facing a power vacuum, the Greens and the FDP could have less leverage to extract concessions from the SPD.

If those negotiations ultimately fail, the conservatives could seek to form a new government, but it’s likely that they would want a new leader to serve as chancellor instead of Laschet, with Soeder best-placed.