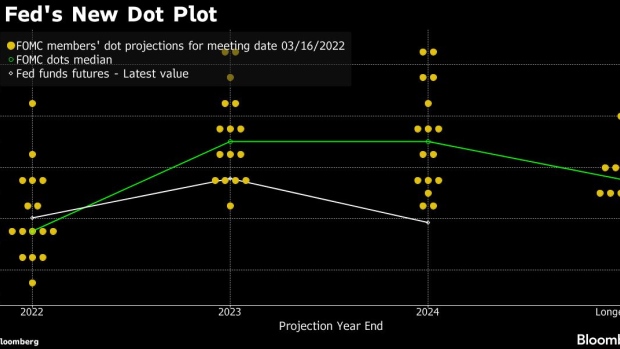 (Bloomberg) -- The Federal Reserve’s most hawkish official cracked open the door to discussing the first 75 basis-point interest-rate hike since 1994, a move economists say would be a last resort in case inflation further spirals out of control.

St. Louis Fed President James Bullard on Monday gave high praise for former Fed Chairman Alan Greenspan’s decision to raise rates by three quarters of a percentage point that year, saying it “set up the U.S. economy for a stellar second half of the 1990s, one of the best periods in U.S. macroeconomic history.”

“I wouldn’t rule it out, but it is not my base case here,” he said in a virtual presentation to the Council on Foreign Relations.

Bullard, 61, an economist who’s worked at the St. Louis Fed since 1990 and became its president in 2008, has been the strongest voice for tighter policy among Federal Open Market Committee participants over the past year. He’s also become an influential voice whose more recent recommendations have ended up being followed by other committee members, though his impact throughout his tenure has been mixed.

In recent months, he has urged the FOMC to halt its purchases of Treasuries and mortgage-backed securities early, which the panel did in March, and has pushed for a half-point hike starting in early February, which Fed Chair Jerome Powell and other policy makers have now said is on the table if needed for their May 3-4 meeting.

“Seventy-five basis points has to be on the table if inflation accelerates sharply,” said Stephen Stanley, chief economist at Amherst Pierpont Securities LLC. “Is it likely? No. I think inflation would have to be accelerating, giving a sense of getting of out of control, to spark a move of that magnitude.”

Powell has said that a 50 basis-point increase is possible next month. Comments by colleagues since then have hardened expectations they’ll make that move, as officials extend a hawkish pivot to curb the hottest inflation since 1981.

The math argues against a 75 basis-point hike, or larger, at this point. Most Fed officials have said their immediate goal is to lift rates to around a neutral setting -- neither expansionary nor contractionary -- which they estimate to be about 2.4%. Markets are pricing in the likelihood of half-point hikes in both May and June, which would lift the target rate’s range to about 1.25% to 1.5%, getting closer to neutral so that it would seem to make a mega-hike unnecessary.

Greenspan’s 75 basis-point move in November 1994, which brought the benchmark rate to 5.5%, came near the end of series of hikes totaling 3 percentage points. It also followed a meeting with no change in interest rates. The Fed then cut rates a few times starting in July 1995.

While many economists see the March consumer price index increase of 8.5% as a likely peak in near-term inflation, lifted by energy prices sparked by Russia’s invasion of Ukraine, there’s no certainty on that.

Robert Dent, U.S. economist at Nomura Securities, who was among the first to predict a Fed rate hike of a half point, said a three-quarter-point hike is “absolutely possible” this year if the FOMC senses that inflation is moving to a higher regime. That could be driven by Americans’ price expectations becoming less anchored, prices rising outside food and energy or wages spiraling too much for comfort.

“The main constraint for how quickly the Fed can raise rates is market functioning and what can be priced without causing too-sharp tightening of financial conditions,” he said. “If markets start to price 75 basis points -- or more, for that matter -- we think the Fed would take it.”

“I think 75 bps is on the table. ... The 1994 cycle is what a ‘nimble’ Fed frontloading rate hikes would look like... But I also think the risk for a less aggressive path is also quite likely.”

Bullard has argued for the FOMC to raise rates to 3.5%, which he cites as a goal based on a version of Stanford University professor John Taylor’s monetary model that sets rates based on unemployment, inflation and an estimate of the neutral rate. Markets are pricing in about 2 percentage points of additional hikes this year.

Bullard has often been echoed by Fed Governor Christopher Waller, the former St. Louis Fed research director who was confirmed to his current post in 2020.

Other Fed officials have sometimes come to embrace his views -- as they did when Bullard pushed for a second round of asset purchases following the 2007-2009 recession -- but have just as often resisted, making him look like an outlier in the policy debate.

Bullard was the lone dissenting voter in the March meeting, favoring more aggressive action. Minutes of the Fed’s gathering showed many officials favored raising rates by a half point and only opted for the more cautious 25 basis-point move because of the uncertainty around Russia’s invasion of Ukraine. The account showed officials expect to start shrinking their balance sheet by $95 billion a month, or more than $1 trillion a year, and could announce a decision in May.

Chicago Fed President Charles Evans, a dovish policy maker who said he’s open to discussing a half-point move, has also said he doesn’t see a big risk in waiting to get to neutral by a few months and has called the March FOMC projections for a year-end rate of 1.9% as reasonable. Sometimes-hawk Kansas City Fed President Esther George has urged a “steady, deliberate approach.”

Beyond startling markets, there’s also the possibility that too much tightening could spark a recession. Those fears have already jolted some on Wall Street, with former Treasury Secretary Lawrence Summers among those predicting a downturn. Goldman Sachs Group Inc. estimated chances of a contraction at about 35% over the next two years.

“It’s not clear how much more a three-quarter percent move would achieve given the accompanying risk of destabilizing financial markets,” Grant Thornton chief economist Diane Swonk said. “The Fed wants to tighten financial conditions, not trigger a seizure in credit markets. The latter argues more measured but deliberate moves.”