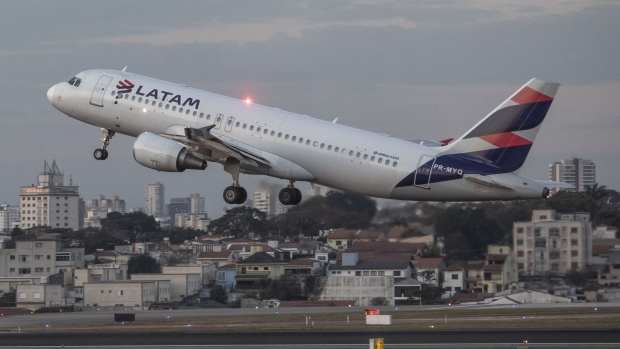 (Bloomberg) -- Latam Airlines Group SA has reached a deal with key stakeholders that paves the way for the Chilean carrier to slash debt and exit bankruptcy under new ownership.

Latin America’s largest airline plans to raise around $5 billion by issuing shares and convertible notes to current stockholders and creditors as it exits Chapter 11 bankruptcy, according to court papers. Ultimately, the deal allows a group of creditors -- led by Sixth Street Partners, Sculptor Capital and SVPGlobal -- to take control of the company.

It will also allow Santiago-based Latam to slash its debt load by around $4 billion upon exit from the process, which could come as soon as mid-2022 if approved by a judge and shareholders. Delta Air Lines Inc., Qatar Airways and Chile’s Cueto family -- which together owned most of the company going into the reorganization -- have agreed to support the plan, helping smooth over thorny Chilean law issues that have hung over negotiations.

Creditors and shareholders “joined forces in providing over $5 billion of fresh capital for Latam to support the restructuring and bring it forward,” Roberto Alvo, chief executive officer of Latam, said in an interview. The plan and agreement “provide the basis for a very strong and solid future of Latam.”

The deal marks a win for Latam, which filed for bankruptcy in 2020 as Covid-19 lockdowns stymied international travel. Had the company failed to file a restructuring plan by Friday, it risked losing control of its bankruptcy exit strategy. Rival carrier Azul SA has said it wants to buy Latam if given the opportunity.

For Latam, the plan is a major step toward exiting bankruptcy. Creditors who are unhappy with the deal can still seek to block it, but U.S. bankruptcy rules allow a company to force a restructuring deal on unwilling creditors if certain legal hurdles are met.

The airline plans to issue $800 million of common stock and resume trading in Santiago with American depositary receipts, or ADRs, in New York, Alvo said. Existing shareholders will get the first crack at purchasing the new stock -- an unusual occurrence in U.S. bankruptcy, which typically sees shareholders wiped out entirely. But Chilean regulations give stockholders rights over new shares sold by their companies.

A creditor group owed billions of dollars by Latam has agreed to buy any new shares not purchased by existing stockholders. In addition to Sixth Street, Sculptor and SVPGlobal, that creditor group included Monarch Alternative Capital and Silver Point Capital as of Oct. 27, according to court papers.

Crucially, the plan calls for the issuance of three classes of notes that can be converted to stock. In keeping with Chilean law, current stockholders will have the right to buy those, too, but their structure makes them more attractive to creditors and shareholders supporting the plan, Alvo said.

Low-ranking creditors can swap their claims for one class of the notes, while the others are designed for stakeholders that have already agreed to support the plan or are contributing fresh cash to Latam, Alvo said.

All told, existing Latam shareholders could end up with close to 30% of the the equity in the airline, with the rest ending up in the hands of creditors, he said.

In addition, Latam will take on $2.75 billion of new debt -- to be raised either through the bond market or term loans, along with a credit facility -- which will be used in part to repay current creditors. Overall, plan will reduce Latam’s debt to about $7 billion from around $11 billion at the start of the bankruptcy.

“It was a proposal that was hypothetical and impossible to bring forward,” he said, without providing details. “We considered its merits. It’s insufficient.”

Azul has been working with a smaller group of creditors on an alternative bankruptcy exit plan, according to a person with direct knowledge of the proposal who asked for anonymity because the details are confidential. The proposal would result in the formation of a new company owned by Latam creditors and Azul shareholders. Combining two of the largest carriers in the Brazilian domestic market would create a more efficient company and cut operating costs, the person said.

But under U.S. bankruptcy rules, because Latam filed its plan within a court-specified deadline, Azul and other creditors’ ability to float their own plans is severely curtailed. Latam has the sole right to pitch a restructuring proposal until that right is terminated.

Latam used Chapter 11 to trim its fleet, renegotiate aircraft leases and cut other costs, including slashing its workforce to around 29,000 from 43,000 previously. The company has seen domestic travel in key markets, such as Brazil, Colombia and Chile, rebound, but it won’t reach pre-pandemic levels of demand until 2024, Alvo said.

It will emerge into a Latin American travel market turned upside down by the pandemic, with some of the largest carriers, including Colombia’s Avianca Holdings SA and Grupo Aeromexico, forced into bankruptcy.

Alvo said Latam has cut operating costs to allow it to compete with the ultra low-cost carriers and is in the final stages of receiving regulatory approval for a joint venture with Delta that will boost its international flight options.

“The whole industry and the company has been brought to its knees by this unforeseen event,” he said, referring to the impact of Covid-19. “Today, our position in all of the countries where we have operations is equal or better than the one we had prior to entering the pandemic.”