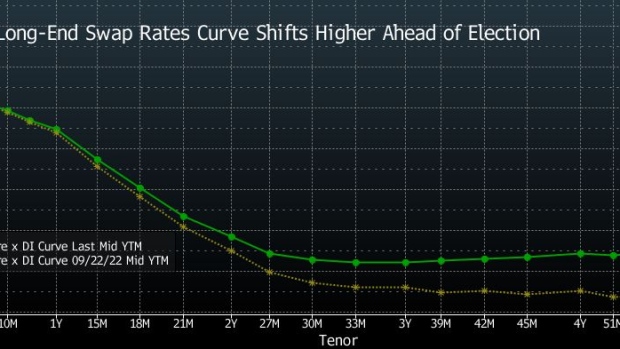 (Bloomberg) -- Brazilian markets are losing the calm that had come to characterize them in the run up to Sunday’s presidential election.

The real and local stocks tumbled this week, while swap rates soared after a series of polls showed that Luiz Inacio Lula da Silva may get an outright victory in the first round, avoiding the need for a run-off. That would be the first time any candidate has gained such a resounding endorsement since 1998.

Investors are concerned that such a result would embolden the former president and union leader to take a more hard-line approach once in office. As market jitters mount, foreign investors pulled money out of local stocks in seven of the 10 trading sessions through Sept. 26, according to exchange data compiled by Bloomberg.

“Lula would leave the race stronger and with a smaller need to make concessions” should he win in the first round, said Sergio Zanini, partner, CIO and fund manager at Galapagos Capital in Sao Paulo. It would reduce the need for him to announce market-friendly names for his cabinet with an eye to gaining support in a second round, he said.

The real has tumbled about 2.5% this week, the second worst-performing currency in the world, while long-end swaps are up 47 basis points. The Ibovespa stock index is down about 4%, underperforming the US benchmark S&P 500 Index by a large margin, though it’s still ahead of most main stock indexes worldwide for the year. The net foreign outflow of funds stands at 2.3 billion reais ($427 million) this month.

Ipec, one of the most traditional Brazilian polling institutes, released its latest survey on Sept. 26, showing Lula garnering 52% of valid votes -- which excludes annulled ballots and those cast in blank -- enough for a victory in the first round.

Datafolha, another major pollster, will release fresh results Thursday after the market closes. Its previous surveys have also shown a good chance of an outright victory for Lula.

A massive victory for Lula’s Workers Party may also stoke fear of social unrest after President Jair Bolsonaro repeatedly declared a lack of confidence in the voting system, fueling concern he may challenge the results.

While the latest polls have undermined the local market, many remain skeptical with the methodology and the demography charts used to extrapolate the results from the surveys. Last week, Goldman Sachs Group Inc. joined hedge funds including Legacy Capital in telling clients that the elections are likely to be tighter than polls are signaling. Odds of Lula being elected on Sunday currently stand at between 20% to 25%, according to political consultancy Eurasia Group.

Lula and Bolsonaro will face-off on Thursday at 9:30 p.m. ET during the last debate before the vote on the Globo TV channel, the most watched in Brazil.

“The market reaction to an outright Lula win will probably be negative,” said Fernando Siqueira, head of research at brokerage Guide Investimentos in Sao Paulo. “It would materially increase the risk of Bolsonaro and his supporters contesting the results.”