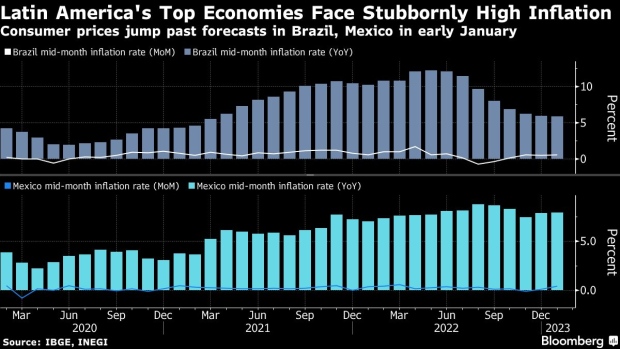 (Bloomberg) -- Brazil’s and Mexico’s consumer prices rose more than expected in the first weeks of the year, highlighting challenges facing policymakers as they work to bring inflation back to their targets.

Official data released Tuesday showed Brazil’s prices rising 0.55% in mid-January from the month prior, above analysts’ 0.51% median estimate. Mexico’s inflation stood at 0.46% during the same period, above the 0.39% forecast, while the closely-watched core reading also rose past projections.

Policymakers in Latin America’s leading economies are keeping their guard up as they struggle to bring inflation back to their targets. Mexico is expected to deliver its 14th straight key-rate increase next month, extending its record-breaking hiking cycle. While Brazil’s central bank has paused tightening, its board members are keeping a close eye on rising cost-of-living expectations as the new government disperses billions of dollars in additional spending.

Brazil’s monthly inflation was driven by a 1.1% jump in healthcare, though transportation and housing posted much smaller rises than before. Annual inflation eased slightly to 5.87%, well above this year’s 3.25% target.

Before taking office on Jan. 1, President Luiz Inacio Lula da Silva obtained congressional approval to increase the public spending cap, allowing for an additional 168 billion reais ($32 billion) in expenditures in this year. The bulk of the funds are earmarked for welfare programs for the poor.

He has since cast doubt on the importance of central bank independence, and criticized its inflation target as too low. Policymakers’ next decision on rates will take place on Feb. 1.

“Recent discussions about a possible revision of the inflation target and interference in the choice of new central bankers directors are worrying the market, as they can weaken the potency of monetary policy, reducing its credibility,” said Rafaela Vitoria, chief economist at Banco Inter.

Lula’s actions have whipsawed financial markets at time when economists are bracing for consumer price pressures as federal tax breaks, instituted by the previous government, are set to expire.

Meanwhile, Mexico’s government has implemented measures to rein in consumer-price increases, recently extending an inflation pact focused on basic goods to ensure that there are affordable items on supermarket shelves.

In Mexico, processed food and drinks led the inflation acceleration as some companies raised prices at the start of the year and a higher excise tax on soft drinks took hold, said Gabriel Casillas, chief Latin America economist for Barclays Plc.

Annual inflation was 7.94% in the first two weeks of January, above the 3% target. Core inflation, which excludes volatile items such as fuel, accelerated 8.45% from a year prior, above the 8.32% median estimate. The measure, which is closely watched in Mexico, had been slowing since November.

“We continue to expect Banxico to be able to decouple from the Fed at its next monetary policy meeting on February 9, where we expect the board to deliver a final hike of 25 basis points,” Casillas said.

Banco de Mexico downshifted its tightening campaign in December, raising rates 50 basis points after four straight 75 basis-point hikes, with a promise to raise borrowing costs again. Its Feb. 9 board meeting will be the first for new Deputy Governor Omar Mejia Castelazo, a surprise pick whose nomination was confirmed by lawmakers last week.

--With assistance from Giovanna Serafim, Rafael Gayol and Barbara Nascimento.