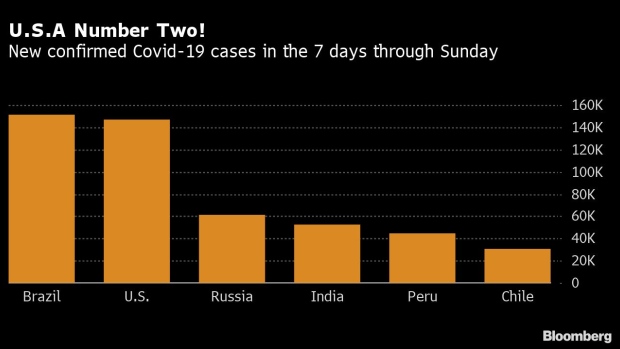 A truck drives through the open pit at the Lipari Mineracao Ltda. Brauna Diamond Mine in the Municipality of Nordestina, State of Bahia, Brazil, on Wednesday, May 3, 2017. The Brauna Mine is the first diamond mine in South America that has been developed from a kimberlite deposit, the primary source rock of diamond. Photographer: Dado Galdieri/Bloomberg , Bloomberg

(Bloomberg) -- The decision to keep Chinese factories shut after the Lunar New Year sent shudders through the massive mines of Brazil and Chile that feed them. Now, with China getting back to work and Latin America the new virus hot spot, concern is shifting from demand to supply.

Iron-ore shipper Vale SA had a scare last week as it had to fend off an attempt by Brazilian prosecutors to close a complex that accounts for a tenth of its output. A union at copper behemoth Codelco said members are concerned that a still small outbreak of the virus will spread.

Alarm bells are starting to ring again in metal markets as the outbreak explodes in Latin America, with the region’s highly urbanized population of 600 million accounting for about 40% of daily deaths globally. That’s coming at a time when Chinese demand is recovering and markets tighten. Chile is the top exporter of copper and Brazil is the second-largest shipper of iron ore.

“Mine supply problems from Covid-19 in Latin America are far from over yet,” Wenyu Yao, senior commodities strategist at ING Bank, said by phone from London. “Chile is a big unknown now.”

So far, mining heavyweights like Vale and Codelco have managed to continue operating through the outbreak, adopting safety measures without stalling output. Other mines in the region that did shut are now reopening. But the industry has been helped by relatively low rates of illness in the wider populations. That’s no longer the case.

On Friday, spot iron ore surged past $100 a ton as worries that the pandemic may curb Brazilian supply coincide with sustained, robust demand in top steel producer China. Futures now look set to hit that level, too, with the contract in Singapore advancing for the past four days.

Brazil surpassed the U.S. in new coronavirus cases last week, and the disease is now spreading in northern states such as Para, which accounts for 8% of global iron ore supply. In April, Vale cut its shipment guidance due to bad weather and the virus’s impact on operations.

The disease has also reached Brazil’s meat-processing industry, with JBS SA ordered to shut operations at a plant in Rondonia state last week in the country’s first beef-facility closure. Brazilian oil has also been hit, with nearly 500 confirmed cases and one death among offshore workers, although production hasn’t been impacted.

Compounding Brazil’s health disaster is a potential political crisis. Protesters clashed on the streets of Sao Paulo Sunday and President Jair Bolsonaro joined a demonstration against Congress and the Supreme Court.

“The Covid-19 outbreak in Brazil creates tangible risks to iron ore supply over the upcoming weeks, despite mining being allowed to operate as essential business,” Citigroup Inc. analysts including Tracy Liao wrote in a report. “Rising infections among workers may prompt the miners or local authorities to impose more draconian quarantines, which could limit productivity or even close mines.”

Meanwhile, port stockpiles of iron ore in China have continued to decline and Chinese steel demand has improved notably over the past two months, reflected by inventory drawdowns. Even though prices may stay elevated for longer, Citigroup maintains its bearish view, forecasting prices to fall to $70 a ton by the end of 2020, with Vale expected to manage the outbreak well.

In a response to questions, Vale reiterated annual production guidance of 310 million to 330 million tons, which factors in pandemic risks such as higher absenteeism and the possibility of tighter restrictions in Brazil. The company has also offered financial support to its supply chain and imported health equipment for regions where it operates. Like Codelco, Vale has implemented social-distancing measures, workplace disinfection, screening and testing.

It’s a similar story in copper as supportive demand-side data fuels a rebound. On Monday, copper futures reached the highest level since mid-March after manufacturing data from China pointed to a continuing recovery.

Chile’s Codelco has managed to keep operating at close to normal rates, helping prevent markets from tightening further. But maintaining output may become more difficult as Covid-19 cases in the country surge. With a population of just 18 million, Chile is reporting new cases on a per-capita basis at a pace comparable to that of Spain at the peak of the spread in March, pushing hospitals toward collapse and prompting authorities to tighten restrictions.

Workers at Codelco’s Chuquicamata mine are concerned that a small outbreak will grow as the company continues to operate at normal production rates, a union leader said. Ten staff members and 30 contract workers have tested positive at the mine, Miguel Veliz, director of Union No. 3, said by phone, adding that 120 others are quarantined awaiting results.

Mine workers began getting sick April 20, with detections accelerating in recent weeks, Veliz said. To be sure, the number of cases is a small fraction of the workforce -- Chuquicamata has 4,000 staffers and 7,000 outsourced workers.

In a written response, Codelco said it implemented preventive controls at Chuquicamata that allow it to quickly detect and isolate sick workers and their contacts. Most infections happened outside the mine in rest periods, it said. Chuquicamata is just north of Calama in the Antofagasta region, which has seen a sharp rise in cases in recent weeks.

Still, mines typically operate with greater social distancing than, say, meat packers. who have been much harder hit by the virus. Assuming South American mines navigate the pandemic, the copper rally may run out steam with China’s reopening well-flagged and relations between Beijing and Washington deteriorating.

“Risk exists -- like the pandemic emerging in the mining districts,” said BTG Pactual analyst Cesar Perez. “There could be a possibility where the government becomes restrictive, but given how strategic companies have been, the risk of meaningful disruptions to production is still distant for now.”