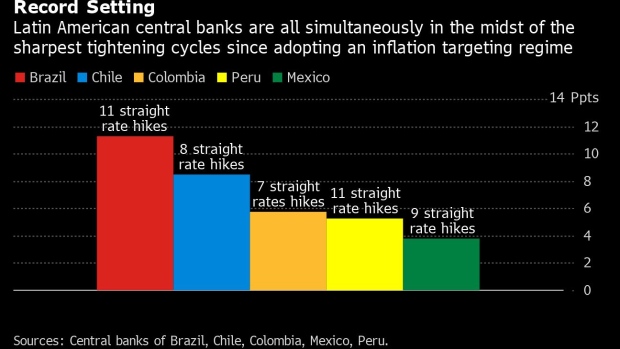 (Bloomberg) -- Aggressive interest rate hikes by Latin America’s central banks since last year helped to prevent a currency crisis and tamed some of the inflationary pressure in the region, according to Agustin Carstens, the head of the Bank for International Settlements.

The monetary policy tightening delivered by the region’s central banks helped to contain the sudden depreciation in exchange rates seen during past episodes of sustained interest rate increases from the US Federal Reserve, Carstens, a former governor of Mexico’s central bank, said.

Without the early action of these banks, inflation would now be two to three percentage points higher and it would be much more difficult for policy makers to tackle the price pressure, he said Monday.

The region’s central banks “have so far been quite successful in avoiding an inflationary source that usually takes place in emerging markets, the exchange rate, which is very dangerous and hard to control,” Carstens said in a briefing with reporters. “It would have been much worse had they waited.”

Central banks in Latin America started hiking their key interest rates much earlier than their peers in developed countries -- Brazil has already raised borrowing costs 11 times since March 2021 -- to prevent the expected reversal of capital flows from hitting their currencies once the Fed started increasing borrowing costs in the world’s largest economy.

Though more than a few governments and politicians around the region assailed central banks’ monetary policy tightening, including Mexico’s outspoken President Andres Manuel Lopez Obrador, the aggressive response successfully staved off any sudden depreciation of the main currencies. Three of the four best performing emerging markets currencies in the past six months hail from the region.

Still, annual inflation remains at multiyear highs in much of the region, with rates in Brazil and Chile close to 12% and Mexico approaching 8%.

“The central banks in the region will have to continue increasing rates a bit, but I think they are in a good position to avoid an excessive hike,” Carstens said.