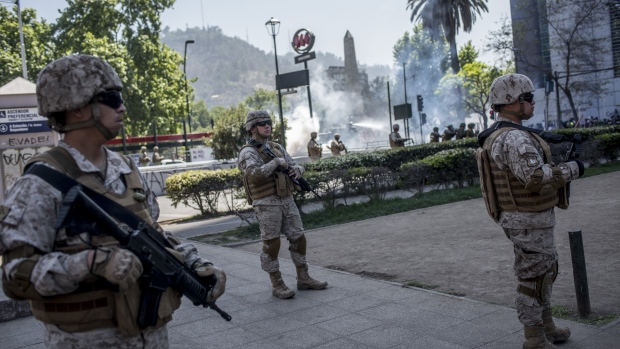 Fire burns on a street during a protest on Oct. 21. Photographer: Cristobal Olivares/Bloomberg , Bloomberg

(Bloomberg) -- Just weeks before the worst civil unrest since Chile returned to democracy 29 years ago, President Sebastian Pinera described the country as “a true oasis” amid Latin American turmoil.

The billionaire investor-turned-politician isn’t alone in his glowing assessment of a country that regularly tops regional prosperity metrics. However, the deadly upheaval of the past four days shows the chasm between the Andean exemplar’s elite and those who feel abandoned.

Eleven people have died and about 1,500 have been arrested in a wave of arson and riots that’s brought cities to a near standstill and seen security forces fire on masked looters. On Monday, local markets slumped as the violence seemed poised to persist.

What began as a protest against a 4-cent subway-fare hike quickly became an outpouring of broad discontent over ecnomic inequality, pensions, health and education. While Pinera back-pedaled on the fare increase, his efforts to crack down on violence merely intensified it.

The protests, organized organically on social media, have no real leaders and encompass a spectrum ranging from the disgruntled bourgeoisie to black-clad anarchists.

“The signs were there all along -- no one knew how to read them properly,” said Robert Funk, politics professor at the University of Chile’s institute of public affairs. “In the academic community for years we’ve been saying that something’s got to give. It’s not just inequality. It’s also what Chileans call abuse.”

After an initial bellicose reaction to the protests, the president adopted a more conciliatory tone. In a televised address late Monday, Pinera called for dialogue and said the government was working on a reconstruction plan to rebuild the country after the violent protests. The government is also working on social measures including lowering the price of drugs, improving healthcare and the pensions system, he said.

Political scientists who study Chile say the discontent has been years in the making. They point to poor results from Chile’s privatized pension system, in which many retire into poverty, and crushing personal debt. The strength of the dollar this year has also meant hikes in prices of regulated services such as electricity and transport.

But it was the peak-hour subway fare hike that set it all off. A study this year showed many people in Santiago face commutes as long as two hours. The situation devolved rapidly after Economy Minister Juan Andres Fontaine suggested workers should just get up a little earlier if they didn’t want to pay higher prices.

“Blame goes all round here,” Jennifer Pribble, associate professor of political science at the University of Richmond in Virginia. “The political class has been completely resistant to opening up politics and engaging responsibly with citizen discontent and discussing a more fundamental shift in the social and economic model. If institutions aren’t capable of channeling demands, then politics tends to spill over into the street.”

On Monday, hundreds of protesters filled Plaza Italia. Most were university students banging pots and wearing scarfs over their mouths and noses, chanting for the military to leave the streets and carrying banners calling for Pinera to resign.

Armored vehicles sprayed tear gas to disperse demonstrators, and officers occasionally fired at the crowd. The people set burning barricades across nearby streets and some threw stones at police and army vehicles as they raced by.

The square gradually filled during the afternoon and troops abandoned the area. Demonstrators chanted, played instruments and sang in a festive environment reminiscent of sports celebrations held in the same place. At 1 p.m., the crowd began marching through the city.

“Demonstrations were very peaceful at the beginning, but they turned violent because the government sent the military to repress us,” said Stephanie Mora, 20, a law student at the Universidad de Chile.

Indeed, the armored vehicles in the streets -- and Pinera’s initial statement that Chile was at war -- had special resonance in a country that from 1973 to 1990 was ruled by one of the continent’s most brutal military dictatorships. Army General Javier Iturriaga on Monday responded to Pinera’s comments by saying, “I’m not at war with anyone.”

The protests will derail the government’s tax, pension and labor reform agenda that it had promoted as key to growth, according to Ricardo Solari, an economist and former minister during the government of socialist Ricardo Lagos.

“Pinera’s government from now on will just focus on running things smoothly and drop its reforms,” Solari said. Santiago is set to host President Donald Trump and other leaders of the Asia-Pacific Economic Cooperation forum in less than a month.

But normality may be hard to regain. Eleven deaths were caused by arson attacks at a supermarket and a warehouse. About 70 subway stations have been damaged, dozens of buses have been burned, shops looted and buildings set alight. Curfews have failed to prevent the chaos, which spread to other regions. Mining unions called a general strike for Wednesday.

“I’m here to protest against social injustice in this country and against the repression of the Chilean state,” Mateo Mazuera, a 22-year-old graphic design student, said Monday. “I want to see the constitution changed, because we are living in a democracy under a constitution that was written by a dictator.”

Eighteen-year-old theater student Brenda Gonzalez has been demonstrating peacefully with her parents. She says her father wakes up at 4 a.m. for his job as a bus driver, which pays about $400 a month. Her mother cleans houses.

“We barely make it to the end of the month,” she said. “Those who are looting are thieves, that’s all. We want real change and we are fighting for something that’s important.”

--With assistance from Eduardo Thomson.

To contact the editors responsible for this story: James Attwood at jattwood3@bloomberg.net, Stephen Merelman