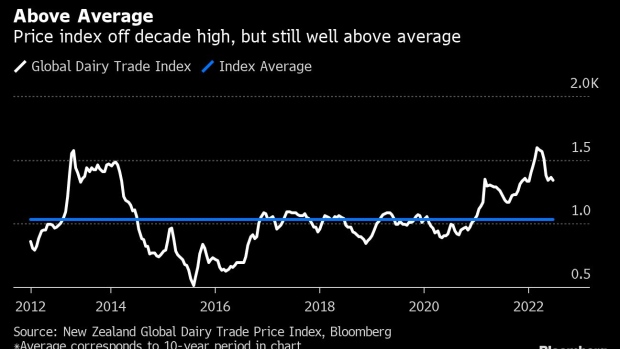 (Bloomberg) -- Uruguayan cooperative Conaprole is preparing to sell its first plant-based milk alternatives under new chairman Gabriel Fernandez, in a nod to changing consumer tastes that are upending the dairy industry in other countries.

“We are evaluating how to do it, when to do it and the characteristics of the products we could launch -- some products are under development,” Fernandez said in an interview from his Montevideo office. “It’s a market trend that one has to go along with.”

Even so, Fernandez, a dairy farmer who started his five-year term as chairman of the cooperative in March, bristles at the idea that so-called plant milk is a substitute for traditional diary.

“We consider these products not to be milk,” said Fernandez, who sees milk alternatives as complementing Conaprole’s dairy products. He’s convinced that consumers will ultimately value the nutritional benefits of dairy just as they did decades ago when they embraced butter due to health concerns about vegetable oil spreads.

Plant Milk Is Coming for Your Kids, $16 Billion US Dairy Market

Milk alternatives made from nuts and grains are now a $4 billion market in the U.S. where consumption of cow’s milk has been falling for decades.

Conaprole is so confident in emerging-market dairy demand that it’s breaking ground this month on a new $15 million headquarters building. Sales could exceed $1 billion for the first time in fiscal year 2022 thanks to high prices and strong demand in key export markets Algeria, China and Brazil, Fernandez said.

Fernandez thinks benchmark dairy prices will fluctuate around current levels during the Southern Hemisphere spring in the second half of the year when Conaprole processes about 60% of the 1.5 billion liters (400 million gallons) it receives a year.

“We expect reasonable to good prices in the next fiscal year,” he said. “Prices are increasingly volatile to the point that in the current fiscal year we’ve seen whole powdered milk go from $4,800 to $3,900” per ton in just four months.

In January, Conaprole finished the $140 million expansion of its Villa Rodriguez plant that’s now one of the largest in the region with a capacity of 4 million liters of milk per day. The revamped plant will help Conaprole -- whose clients include Nestle SA and China’s Yili Group -- shift more of its production from commodity products to premium food ingredients and nutrition formulas for infants, athletes and other demographics.

Specialty ingredients and nutrition formulas could account for as much as 15% of the cooperative’s dairy exports by volume in the not too distant future, Fernandez said. Those products “will give us better demand and price stability than volatile commodities.”