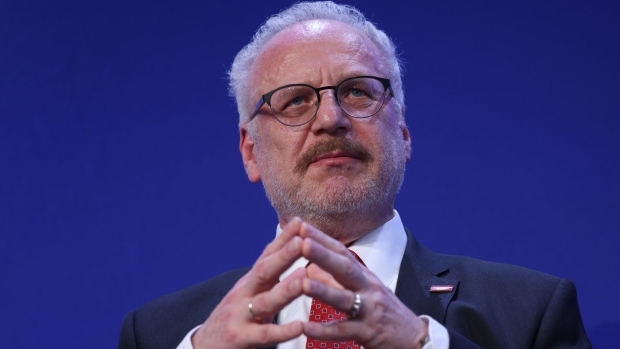 (Bloomberg) -- Latvia needs a NATO brigade, a military contingent that would amount to as many as 5,000 troops, to deter Russia from a potential attack, the Baltic nation’s head of state said in an interview.

President Egils Levits said Latvia will push for additional troops at the North Atlantic Treaty Organization summit next month in Madrid, in coordination with other states on the alliance’s eastern flank that are calling for bolstering the region’s defenses in the face of Russia’s invasion of Ukraine.

“Russia is not provoked by strength, but Russia is provoked by weakness,” Levits said on the sidelines of the World Economic Forum in Davos, Switzerland, on Monday. “So we are looking also for NATO troop presence at a brigade scale,” he said, a level that “can deter Russia.”

Vladimir Putin’s invasion order has triggered a surge in military spending across the region, including the deployment of NATO military equipment and troops across areas near the border to Russia. The leaders of eastern European countries known as the Bucharest Nine will meet ahead of the June NATO summit to coordinate action.

NATO’s Article 5 obliges the alliance to defend any member state attacked from outside, a commitment reinforced by greater troop presence. The U.S. moved about 20 AH-64 Apache anti-tank helicopters to Latvia, a former Soviet state that shares a border with Russia, after the invasion. Levits said he wants the aircraft to remain in the country permanently.

Russia’s attack on Ukraine has had other far-reaching consequences. The invasion prompted Finland and Sweden to drop decades of military non-alignment and apply for NATO membership, which will bolster the defense of the Baltic countries. The bid was immediately opposed by Turkey’s President Recep Tayyip Erdogan, over alleged support of Kurdish militants his government regards as terrorists.

“I think there is a difference between terrorism and human rights,” Levits, a former judge at the European Court of Human Rights, said. “So I think therefore it is possible to find a solution between Finland and Sweden and Turkey in order to solve this issue.”