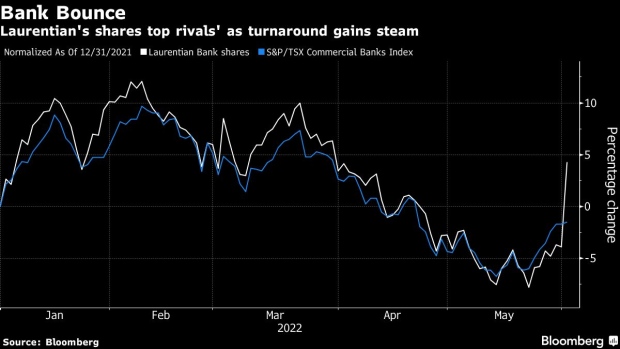 (Bloomberg) -- Laurentian Bank of Canada advanced the most in more than a year after a surge in commercial lending helped fiscal second-quarter profit top analysts’ estimates and signaled that the firm’s turnaround is proceeding ahead of pace.

The shares climbed as much as 8.8% to C$42.02 in Toronto on Wednesday, the biggest intraday gain since March 2021. The Montreal-based bank is up about 4% this year, the best performance in the eight-company S&P/TSX Commercial Banks Index.

Chief Executive Officer Rania Llewellyn, who took the reins in October 2020, has been cutting costs and working to streamline and modernize operations with additions like its first mobile app. The bank got a boost last quarter from a 26% year-over-year surge in its commercial-loan balances and a 4.2% drop in expenses.

“We continue to make significant progress on our strategy, and over the second half of the year we will be focused on initiatives that drive customer acquisition,” Llewellyn said on a conference call. “We are confident in our ability to exceed our 2022 financial targets, despite the uncertainties in the market.”

Laurentian has closed some “foundational gaps” in its personal-banking business by introducing a new contactless debit card and is working on others, Llewellyn said on the call. The lender has struck a digital partnership that will allow it to gather deposits beyond its core market of Quebec and is on track to shorten the time it takes to approve mortgage applications to three days by year-end, she said.

Reinvigorating the personal-banking business will be key to boosting the shares further, said Gabriel Dechaine, an analyst at National Bank of Canada. Dechaine raised his price target to C$53, from C$49, and continues to rate the stock “sector perform,” the equivalent of a hold.

“While the commercial business shone, the personal bank drifted,” Dechaine said in a note to clients Wednesday. For a “sustainable stock re-rating,” the firm must deliver “a turnaround in its core personal bank, which would mean more advantageous funding for its commercial lending business.”