The magnitude of the Q1 beat is the lowest we've seen in a couple of years: Lyle Stein

Laurentian Bank of Canada is surging in its biggest two-day rally Thursday in more than a year as its second-quarter earnings beat points to gains in its ongoing transformation strategy.

The better-than-expected  results that the company reported Wednesday and the 10 per cent surge in the stock over two sessions has prompted a parade of analysts to raise their price targets on the lender, even as its competitors’ shares have been dragged down this year over concerns of a weakening economy and rising interest rates. 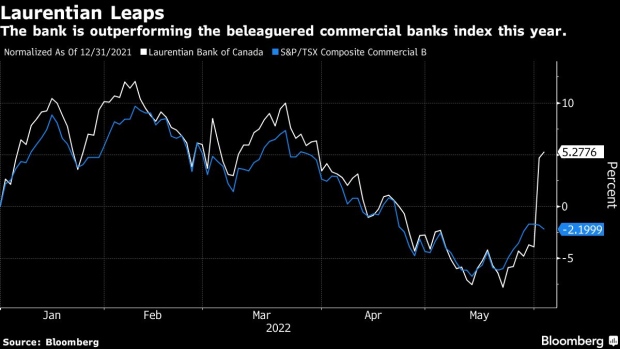 Llewellyn launched a strategy in December to cut costs and modernize operations to turn around the Montreal-based company after years of stagnant growth.

This quarter demonstrated a “strong leap forward for the bank’s ongoing transformation,” Stifel analyst Mike Rizvanovic said in a note to clients. He raised the bank’s price target to $44 from $40. The results were “a stark improvement from recent quarters as the management team looks to build some positive momentum following a turbulent past couple of years.”

At least eight of the 12 analysts that cover the stock raised their targets on Laurentian, including Credit Suisse, TD Securities Inc. and NBC Financial Markets. This year, Laurentian’s average price target has risen the most of any bank this year, increasing one per cent while most of its peers saw their targets drop as analysts weigh whether higher interest rates amid fears of a recession will bolster net interest margins or temper loan demand.

Investors have grown skeptical of the sector as well. Royal Bank of Canada, the country’s largest lender and most valuable publicly traded company, has sunk 1.2 per cent this year, falling from its record high set in January when the financial sector was among the strongest performers on the S&P/TSX Composite Index. While those pressures could also weigh on Laurentian, analysts are bullish on the bank’s growth this year.

“Even though it is still too early to declare mission accomplished at LB, the company is clearly executing well,” Scotiabank analyst Meny Grauman said in a note to clients.

He raised its price target to $50 from $46. “So well in fact that, during the analyst call, LB’s CEO noted that the bank now expects to exceed its 2022 financial targets, even as it guides to some moderation in performance in the second half of the year,” he added.