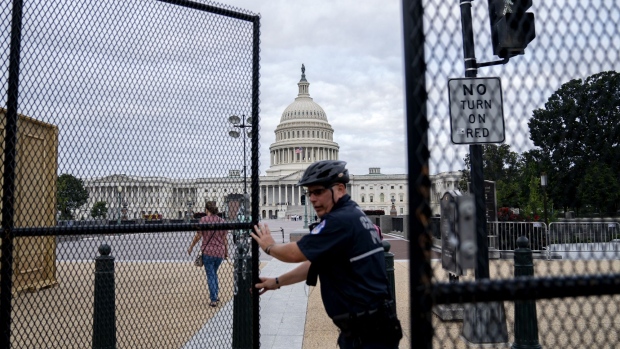 A U.S. Capitol police officer adjusts security fencing outside the U.S. Capitol ahead of a planned "Justice for J6" rally in Washington, D.C. , Bloomberg

(Bloomberg) -- Law enforcement officials are determined to avoid a repeat of the security breakdowns during the Jan. 6 riot at the U.S. Capitol and are preparing for the worst ahead of a Saturday rally in support of those arrested after the insurrection.

Although there’s been no specific threat detected, the security measures -- including placing the National Guard on stand-by and re-installing fencing around the Capitol -- are being put in place out of what one security official said was an abundance of caution.

It’s unclear how many protesters and counter-protesters will attend the demonstration at noon Washington time. It is organized by a group protesting the ongoing federal prosecutions of hundreds of people charged after the Jan. 6 insurrection by a mob of former President Donald Trump’s supporters seeking to disrupt certification of the 2020 presidential election.

The Department of Homeland Security and other intelligence agencies have issued bulletins with few details alerting officials to online banter about potential violence starting Friday, according to one official familiar with the planning There also are warnings about the potential for violence by a so-called lone-wolf extremist.

There also are conflicting reports about whether members of far-right groups like the Proud Boys or Oath Keepers will attend the rally; there is chatter both ways, said the official, but less so than before Jan. 6.

While some congressional Republicans have echoed the protest group’s characterization of those arrested at the riot as “political prisoners,” none have promoted the rally or are scheduled to speak. Trump on Thursday issued a statement of support for those who were detained in connection with the riot, but made no mention of the demonstration.

“Our hearts and minds are with the people being persecuted so unfairly relating to the January 6th protest concerning the Rigged Presidential Election,” Trump said in the statement, repeating his false claim that he lost because fraud.

Democratic Representative Bill Pascrell of New Jersey responded in a tweet: “Trump is trying again to gin up insurrection and get people killed. I’ve called for Trump to be arrested and prosecuted for his Jan 6 treason. Nothing has changed.”

Members of Congress were intended targets of some of the Jan. 6 rioters, who sought to prevent the certification of President Joe Biden’s victory over Trump. But most lawmakers are not even in Washington this weekend. Those who are have been advised by House Sergeant at Arms William Walker to stay off-site.

Look Ahead America, the group organizing the protest at Union Square, a grassy spot to the west side of the Capitol, estimated in its permit application the event would draw about 700 people. But Matt Braynard, the group’s director and a part of the data team early in Trump’s 2016 presidential campaign, has said he doesn’t know for sure.

Capitol Police Chief Thomas Manger, appointed this summer, is positioning extra manpower throughout the Capitol grounds by extending shifts for his force and using reinforcements from other law enforcement agencies.

A series of congressional hearings earlier this year detailed widespread intelligence and law enforcement failures on Jan. 6 that resulted in the mob overwhelming officers on the scene and getting into the Capitol.

Braynard has repeated in interviews with Bloomberg News and elsewhere that his group is instructing attendees to be peaceful and respectful of law enforcement. Speakers at the event include two little-known congressional candidates, not huge draws.

Braynard also asked in a tweet on Tuesday for participants to not display any symbols supportive of either Trump or Biden because the aim is to bring more attention to the legal cases of those arrested on Jan. 6. Federal prosecutors have charge more than 600 people with participating in that riot and the Capitol invasion.

Two previous events by the same group in Washington drew less than 100 attendees. But Capitol Police insist they aren’t going to be caught under-prepared again.

“I urge anyone who is thinking about causing trouble to stay home. We will enforce the law and not tolerate violence,” Manger said this week.