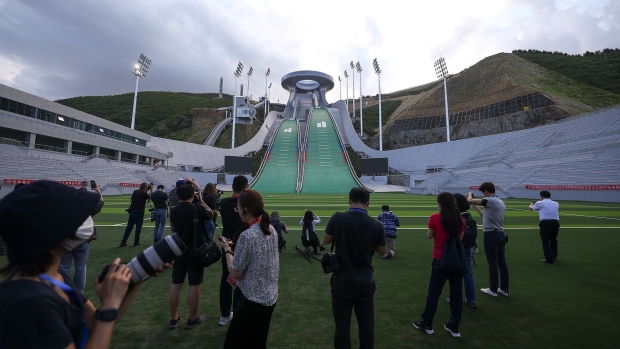 Journalists and others films during a tour at the National Tilter Ski Center for the Beijing 2022 Winter Olympic Games in Chongli on July 14, 2021 in Zhangjiakou. , Photographer: Lintao Zhang/Getty Images

(Bloomberg) -- Members of a congressional panel urged U.S. corporations including Coca-Cola Co. and Visa Inc. to pull their sponsorship of the 2022 Winter Olympics unless the games are moved out of Beijing, adding another pressure point in the strained relationship between the world’s two biggest economies.

The members of the Congressional Executive Commission on China said that unless the Chinese government changes its stance toward Hong Kong and the Uyghur Muslims in the Xinjiang Province, American companies that sponsor the games will be complicit in giving cover to the policies, including genocide against the Uyghurs.

“For many American corporations, it is business as usual when it comes to China,” Representative Chris Smith said at a commission hearing. He told the witnesses that their companies’ involvement in the games furthers “the interests of the government of China, which will utilize the Olympics as a platform to showcase its governance model, all while signaling that crimes up to and including genocide should not interfere with business as usual.”

“We support and follow the athletes wherever they compete,” Lalli said.

Congress is moving on multiple fronts to constrain or punish China over human rights abuses, intellectual property theft and trade, among other issues. Beijing’s hosting of the 2022 games has emerged as one of the areas where lawmakers of both parties have focused attention. A provision of a Senate bill to bolster U.S. economic competitiveness, for example, would prohibit the U.S. from spending government money to send an official delegation to the Beijing Olympics, a so-called diplomatic boycott.

Some lawmakers, including members of the commission, are calling on the International Olympic Committee to either postpone the 2022 Olympics or to relocate them if China does not change its behavior.

The criticism of the companies at Tuesday’s hearing was at times heated. Senator Tom Cotton, an Arkansas Republican, said it was “one of the most pathetic and disgraceful” hearings he’s participated in as a member of Congress. He said it was clear to him that the witnesses “were sent here with orders not to say anything that could offend the Chinese Communist Party.”

Democrats on the panel, including Senator Jeff Merkley, the chairman of the panel, and Representatives Jim McGovern and Tom Malinowski, among others, also criticized the companies’ stances.

“I have huge respect for the stand Coca-Cola has taken on domestic civil rights issues,” Malinowski said. “But are you willing to say you condemn the Chinese government’s policy of holding hundreds of thousands of people in concentration camps because of their ethnicity and religion?”

The representatives said their companies are still assessing how to approach the Beijing games and pointed out that their advertising would focus on the athletes and not on the location of the games.

“We are assessing the situation,” said Andrea Fairchild, the senior vice president of global sponsorship strategy for Visa. “It is important for us to support the athletes, that’s the foundation of our sponsorship.”