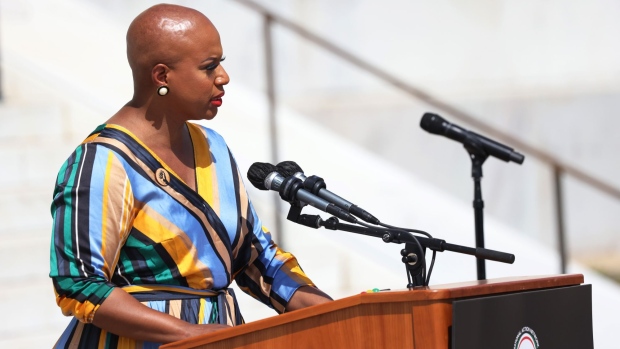 Representative Ayanna Pressley, a Democrat from Massachusetts, speaks during the "Get Your Knee Off Our Necks" March on Washington in Washington, D.C., U.S., on Friday, Aug. 28, 2020. The civil rights rally will be headlined by the Reverend Al Sharpton and is expected to bring thousands to the site where Reverend Martin Luther King Jr. delivered his historic "I Have a Dream" speech 57 years ago. , Bloomberg

(Bloomberg) -- A bipartisan group of US House lawmakers are demanding information on the backlog of over 17,000 people seeking presidential clemency, a power Joe Biden pledged during his 2020 campaign to use to advance criminal justice reform.

“The growing backlog of clemency petitions undermines the promise of a fair and just criminal legal system,” the lawmakers wrote in a letter Tuesday to Elizabeth Oyer, who leads to the Justice Department’s Office of the Pardon Attorney.

The lawmakers asked for a full report from Oyer by June 7 that includes data on the demographics of applicants, submission dates and wait time, relief sought and offenses, among other things. White House and Justice Department spokespeople did not immediately respond to requests for comment.

There are 17,399 pending clemency petitions, according to Oyer’s office, most dating from previous administrations. The Biden administration has received 5,892 since January 2021.

The lawmakers argued that the applicants include individuals incarcerated under outdated sentencing guidelines or for actions that are no longer considered crimes. The backlog also includes people who served their sentences but continue to “face harsh collateral consequences,” they wrote.

During his campaign Biden pledged to use his clemency power for individuals with long sentences for certain non-violent and drug crimes. He promised to release everyone in federal prison for non-violent marijuana offenses.

In April, Biden issued the first round of pardons and commutations of his administration, pardoning three people and commuting the sentences of 75 nonviolent drug offenders.

By this point in his presidency, Barack Obama had granted no clemency, but he ultimately pardoned or commuted sentences of 1,927 individuals during his two terms, the most of any president since Harry Truman. Donald Trump granted one pardon and one commutation in 2017, his first year in office, and six pardons and three commutations in 2018. During his one term, Trump granted clemency to 237 people.

Among those Biden pardoned last month was Abraham Bolden, an 86-year-old former Secret Service agent who was convicted of attempting to sell a copy of an internal document. Bolden, the first African American to serve on a presidential detail, maintained his innocence and has argued his prosecution was racially-motivated retaliation.

Some advocates for clemency say it can be used to address racial inequity in the criminal justice system. Black inmates account for 38.3% of the federal prison population, according to the Federal Bureau of Prisons, despite making up only 13% of the US population.

Between 2012 and 2016, Black men received 19.1% longer sentences for the same federal crimes as White men, according to a 2017 US Sentencing Commission report. Another 2017 report from National Registration of Exonerations found Black people are more likely to be wrongfully convicted than White people and receive longer sentences.

“Every application represents a person, a family, and a community,” the lawmakers wrote in the letter. “And every delayed response represents a miscarriage of justice, a dysfunctional process, and a policy failure in desperate need of repair.”

Pressley introduced a bill, alongside House Democratic Caucus Chairman Hakeem Jeffries and Representative Cori Bush, in December that would create an independent, nine-member board to review clemency applications. Pressley asserted that under the Justice Department the process is subject to influence by law enforcement and prosecutorial interests.

The House Judiciary Committee will hold a hearing on the bill Thursday.

(Corrects in headline and first paragraph it is all clemency seekers)