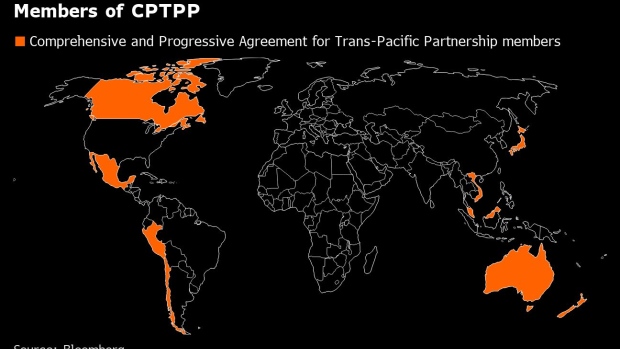 (Bloomberg) -- Key U.S. senators overseeing trade said the nation needs to step up efforts to assert itself in the Asia-Pacific region after China applied to join a trade treaty that was once pushed by Washington as a way to exclude Beijing.

China on Sept. 16 submitted a formal application letter to join the Comprehensive and Progressive Agreement for Trans-Pacific Partnership, or CPTPP. The U.S. originally saw the pact as an economic bloc to counterbalance China’s growing power, with then-President Barack Obama saying in 2016 that the U.S., not China, should write the regional rules of trade. His successor, Donald Trump, pulled out of the deal in 2017, with Japan leading the revised and renamed pact to a successful conclusion the following year.

Senator Tom Carper, a Delaware Democrat who chairs the Senate Finance subcommittee on international trade, along with the panel’s top Republican, John Cornyn of Texas, on Monday repeated warnings made in June about China’s moves, saying Beijing’s efforts shouldn’t come as a surprise.

“We have been warning about China’s subtle yet deliberate moves to join the CPTPP -- the very trade pact crafted to counter China’s trade influence that the United States mistakenly walked away from. And last week, we saw them take an affirmative step in that troubling direction.” the senators said. “We’ve long believed that United States trade leadership is critical for our country’s economy and national security -- and it’s clear that China is not waiting to assert itself in the region. The U.S. cannot afford to continue waiting in the hallway -- we must get our seat back at the table to re-engage our Asia-Pacific allies in trade.”