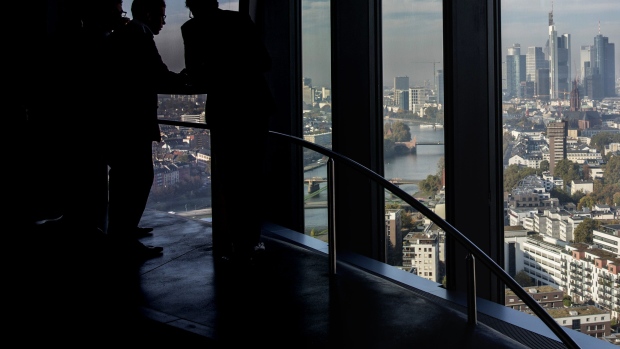 Visitors take in the city skyline view from the 15th floor pantry area inside the European Central Bank (ECB) headquarters as skyscrapers tower over commercial and residential property in Frankfurt, Germany, on Wednesday, Oct. 18, 2017. In a tweet with the hashtag #Brexit, Goldman Sachs Group Inc. Chief Executive Officer Lloyd Blankfein on Thursday hailed “great meetings” he had in Frankfurt and said he will spend a lot more time there. Photographer: Alex Kraus/Bloomberg , Photographer: Alex Kraus/Bloomberg

(Bloomberg) -- A member of the Frankfurt General Prosecutors’ Office, one of the agencies investigating the Cum-Ex scandal in Germany, was arrested over allegations he accepted kickbacks from a businessman who ran a company that provided expert evaluations for the prosecutors.

Police on Thursday raided 10 sites in the bribery probe, including the home of the two suspects, the regular prosecutors’ office in Frankfurt, a separate agency, said in a statement on Friday. It didn’t identify the men who both remain in custody, nor did it not specify which investigations the suspicious evaluations were for.

The Frankfurt General Prosecutors’ Office handles areas of crime that are more difficult to pursue or require extra staffing. It has been handling the Frankfurt probes into Cum-Ex, the controversial trading strategy in which it has filed two indictments and temporarily arrested a former Freshfields lawyer. The office also achieved a measure of fame following a spectacular 2012 raid of Deutsche Bank in which it arrested five of the bank’s employees.

The arrested prosecutor in 2005 inspired the businessmen to set up a company for expert evaluations. About 90% of its revenue, totaling 12.5 million euros ($14.5 million) in fees over the past decade, came from investigations that the prosecutor fed him, according to the probe. In return, the prosecutor got kickbacks of about 240,000 euros between 2015 and 2020, the investigators suspect.

The probe was prompted by an individual in the the suspected prosecutor’s personal life, according to the statement. That’s often the case, said Anouschka Velke, a Frankfurt defense lawyer not involved in the case.

“Very often these kind of cases only get started because someone from the personal life of the suspect blows the whistle,” she said. “Often that’s the wife who was left or a lover or the ‘nice’ neighbors.”