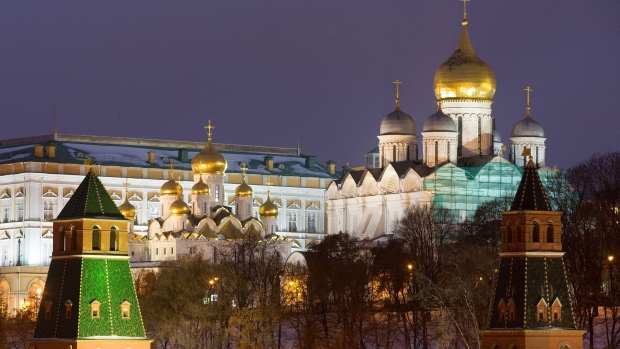 The golden domes of two churches sit beyond fortified outer walls at the Kremlin palace complex in Moscow, Russia, on Wednesday, Nov. 9, 2016. Russia is realistic about limits on the prospects for an immediate improvement in relations with the U.S. after President-elect Donald Trump takes office, according to President Vladimir Putin’s spokesman. Photographer: Andrey Rudakov/Bloomberg , Bloomberg

Hedge funds, family offices and litigation finance firms have been approached by lawyers seeking funding to file legal claims against sanctioned Russians, according to people familiar with the matter. The proceeds would largely be used to compensate Ukrainians for losses incurred in the wake of Russia’s invasion, with investors receiving a cut of any successful claims, said the people, who asked not to be named because the discussions are private.

The initiative has the potential to release as much as $1 trillion of Russian money, according to the group of lawyers who are calling themselves the Ukraine Justice Alliance. But unlocking the sanctioned assets, much of which are located in opaque offshore jurisdictions, will be a complex and lengthy process with scant legal precedent.

“I don’t shy away from the fact that this is groundbreaking stuff that we are looking at doing,” said Ben Brandon, a partner at London-based Mishcon. “It’s very much going to depend on the appetite of clients, the appetite of funders and the appetite of the courts to try and push this through.”

Read More: The Evolution of Sanctions as Financial Warfare: QuickTake

Financing suits targeting state officials and Russians with alleged ties to President Vladimir Putin is likely to be fraught with legal challenges, one of the people involved said, adding that enforcing on any court order to seize assets would be very difficult. At least one hedge fund has already rejected the offer, another person said. A third person said that some investors, including family offices, are considering donating cash to fund the legal action instead.

To add to the complexity, around 20 sanctioned Russians including Mikhail Fridman, Roman Abramovich and Petr Aven have mounted legal challenges in a European court aimed at overturning government sanctions, filings show.

The coalition of lawyers, which set up the alliance shortly after Russia invaded, initially tried and failed to raise money from Ukrainian billionaires. They are also working on a crowdfunding platform that would raise money from individuals who could receive a return if the claims are successful. Partners of the project include a raft of other law firms, as well as investigative media outlet Bellingcat.

The initiative provides a potential solution to an issue that Western governments are currently grappling with following the introduction of sweeping sanctions after Russia invaded Ukraine: can they seize the billions of dollars of assets that have been frozen.

The project will overcome the legal challenges by borrowing “magpie-like” from different jurisdictions and areas of law, Mishcon’s Brandon said. Mishcon has represented rich Russians in the past through a “VIP Russia” service, which included wealth structuring and asset protection and was shelved after Russia’s invasion of Ukraine, according to the International Consortium of Investigative Journalists.

The group has already identified $200 billion of assets to go after, according to Jason McCue, a founding partner at London-based McCue Jury & Partners. The lawyers are currently looking for financing to open claims against sanctioned Russians in the UK on behalf of 50,000 Ukrainian refugees, McCue said.

“This is for ordinary people and ordinary businesses, the butcher, the baker and the candlestick maker,” McCue said.

Launching a civil claim aimed at securing financial compensation for victims of acts of terrorism is not without precedent. A civil court in Belfast awarded around $2 million in damages to relatives of some of the victims of the 1998 Omagh bombing that was carried out by a group calling themselves the Real Irish Republican Army. In that instance, the claimant group was also represented by McCue. However, that claim was funded by the UK taxpayer rather than private firms.

Litigation financing, where investors provide cash upfront to fund an expensive legal battle in return for a cut if the case is successful, is a fast-growing corner of the investing universe. The sector is forecast to almost double by 2028 from $17 billion last year, according to insurer Swiss Re. It has been used to fund lawsuits ranging from high-profile divorce cases to helping indigenous tribes sue a mining firm accused of destroying their homes, as well as more mundane business disputes.

While some argue that litigation funding improves access to justice, the industry has drawn scrutiny for its lack of transparency and for the fees funders charge claimants.

“Without litigation funding there is no way that either companies that have suffered loss or damage, and more importantly people, can seek to recover what they have lost,” said Mishcon’s Brandon.