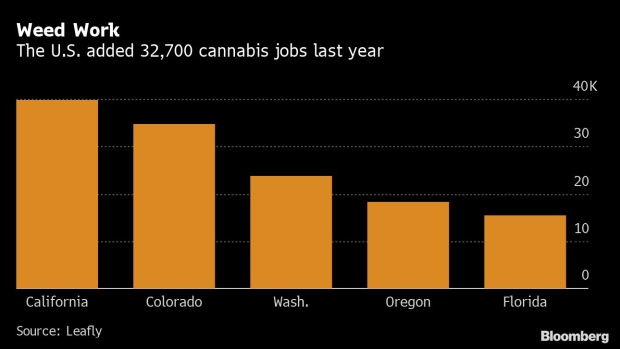 (Bloomberg) -- You wouldn’t know it from the rash of layoffs in the cannabis industry recently, but it’s one of the fastest-growing sources of jobs in the U.S.

The sector employed 243,700 people at the beginning of 2020, up 15% from a year ago and nearly double the number of jobs in 2017, according to data from cannabis information firm Leafly.

“There’s been a lot of headlines in the last three to four months about some of the bigger companies in the cannabis industry suffering layoffs and investment capital drying up,” but the industry is still a “quiet engine of growth,” Leafly senior editor Bruce Barcott said in an interview.

The data indicate that the industry is still very much in expansion mode despite high-profile layoffs at some big companies. Cannabis stock prices have slumped by an average of about two-thirds over the past year and funding options have dwindled, forcing some companies to eliminate jobs to preserve cash.

Aurora Cannabis Inc. said Thursday that it will cut nearly 500 staff across the company, which is about 15% of its total workforce. Tilray Inc. said it’s laying off about 10% of its staff, MedMen Enterprises Inc. cut 40% of its corporate workforce, Hexo Corp. eliminated almost a quarter of its staff and similar cuts have been made at other firms like Sundial Growers Inc. and Zenabis Global Inc.

However, with jurisdictions like Illinois successfully launching recreational cannabis sales and more states preparing to legalize, there’s also optimism that the U.S. industry will continue to post rapid growth.

“Our outlook for 2020 would be growth somewhat similar to 2019,” Barcott said. Last year’s job growth would have been even stronger if new laws in California and Michigan hadn’t pushed once-legal jobs into the illicit market, he added.

The thousands of new jobs being created is an under-appreciated benefit of legalization that tends to get ignored while legislators tout tax revenue, he said.

“It’s a nice way to bring legal money into the system and help the state budget, but I think the real economic boom is on the jobs front,” Barcott said. “A certain portion of these jobs are hopefully moving from the illicit side to the legal side, but most of these jobs simply didn’t exist prior to legalization.”

Illinois’s Legalized Pot Sales Debut Beats All States Except One

To contact the editors responsible for this story: Brad Olesen at bolesen3@bloomberg.net, Will Daley