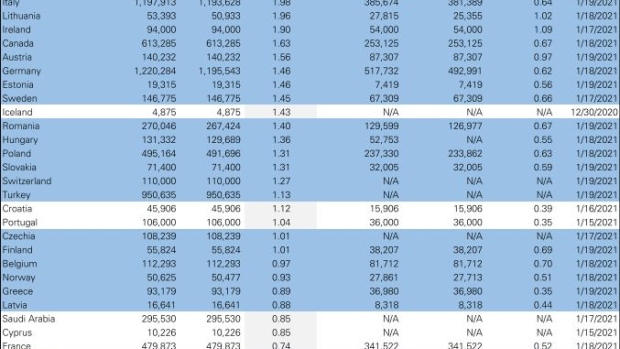 A visitor is vaccinated with the AstraZeneca Plc and the University of Oxford Covid-19 vaccine at the Royal Health & Wellbeing Centre in Oldham, U.K., on Thursday, Jan. 21, 2021. Boris Johnson's government is pinning its hopes on a mass vaccination program to reduce hospitalizations and ultimately deaths, and aims to slowly lift restrictions from March to allow the economy to re-open. Photographer: Anthony Devlin/Bloomberg , Bloomberg

(Bloomberg) -- The race to deliver the jab to the world’s populations has so far been led by a handful of smaller nations, and now they’re outpacing some of the wealthiest countries in the eyes of traders too.

The fastest Covid-19 vaccination rollouts globally, in Israel and the United Arab Emirates, are propelling their equities to the top of the world in 2021. Israel’s benchmark TA-35 stock index has gained 7.6% this year, outperforming both the S&P 500 and the Euro Stoxx Index. And the Dubai Financial Market General Index has climbed about 9.8%, all but reversing its 10% slump in 2020.

Traders are rushing to price the global vaccine rollout and betting nations at the forefront will be the fastest to recover from the crisis, lifting their stocks, currencies and bond yields. The share of a country’s population that has been inoculated might be “the most important statistic to track over the next year,” according to strategists at JPMorgan Chase & Co.

So far, Israel has vaccinated about 30% of its population and the UAE about 20%. If sustained, they could reach the threshold for herd immunity by mid-year, JPMorgan says.

“Will enough divergence open up with respect to herd immunity across countries to render this issue tradeable across markets? Probably,” strategists led by John Normand wrote in a Jan. 8 note. “Those countries that return to pre-crisis levels of activity most quickly due to some combination of stimulus and vaccine distribution should witness the most upward pressure on their interest rates and currencies.”

While Israel and Dubai are tantalizing examples, the case for growth fueled by vaccinations in larger economies is murky, according to Michael Herzum, who runs macro strategies at Union Investment in Frankfurt.

“It is difficult to isolate these effects from other market drivers and therefore makes it difficult to play it on a country-by-country level,” Herzum said. Even so, he’s building vaccination rates into his cross-asset allocation decisions.

In Britain, where the first citizen outside of a trial received the coronavirus vaccination on Dec. 8, the FTSE 100 benchmark has outperformed peers in Europe even as its population suffers through a third national lockdown to quell a resurgence of the virus and a new fast-spreading variant. Vaccinations could pave the economy’s path to recovery and further lift the nation’s stocks, according to Herzum.

“U.K. equities could be in a good position very soon as the U.K. probably reaches herd immunity much faster than the continent due to much better progress on vaccinations,” he said. “This could result in a big swing in economic activity once Covid-19 related restrictions are lifted.”